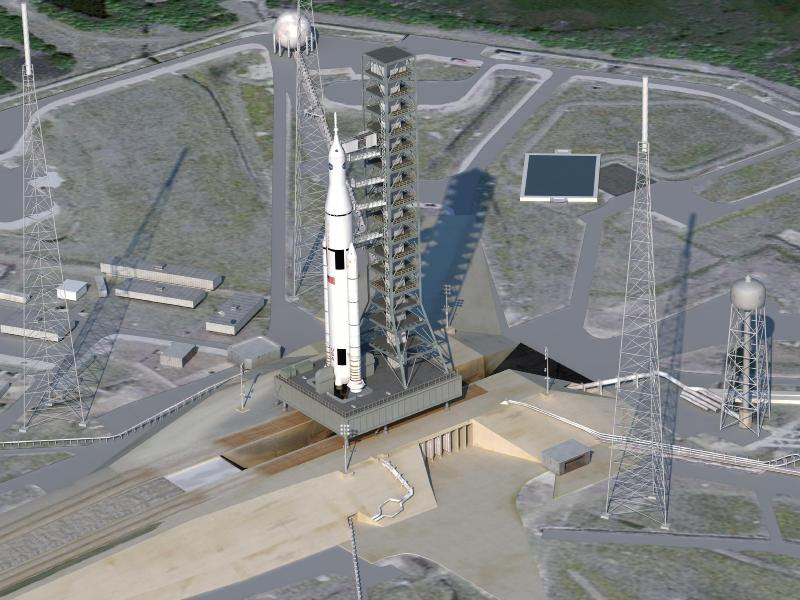 An artist's concept of the Space Launch System at LC-39B. Image source: NASA.

The NASA web site has all sorts of information about the Space Launch System design.


Click the above arrow to watch an animation of the SLS launch from LC-39B.


Click the above arrow to watch NASA Administrator Charles Bolden's statement to NASA employees about the SLS design.

The below written statement was issued by Bolden.

Today is a big day at NASA.

The next chapter of America’s space exploration story is being written, right here, right now.

We’ve selected the design for a new space exploration system that will take humans far beyond Earth. This important decision will create high-quality jobs here at home and provide the cornerstone for America’s future human space exploration efforts.

This new heavy-lift rocket will be America’s most powerful since the Saturn V rocket that carried Apollo astronauts to the moon and will launch humans to places no one has gone before, such as asteroids, Mars and other deep space destinations.

In combination with the crew capsule already under development, increased support for the commercialization of astronaut travel to low Earth orbit, an extension of activities on the International Space Station until at least 2020, and a fresh focus on new technologies— this rocket is key to implementing the plan laid out by President Obama and Congress in the bipartisan 2010 NASA Authorization Act, which the President signed last year.

President Obama challenged us to be bold and dream big, and that's exactly what we are doing at NASA with this new space exploration system. While I was proud to fly on the space shuttle, tomorrow's explorers will now dream of one day walking on Mars.

This launch vehicle decision is the culmination of a months-long, comprehensive review of potential designs to ensure that the nation gets the best possible rocket for the investment—one that is not only powerful but is also evolvable so it can be adapted to different missions as opportunities arise and new technologies are developed.

The rocket will use a liquid hydrogen and liquid oxygen fuel system, where RS-25D/E engines will provide the core propulsion and the J2X engine is planned for use in the upper stage. There will be a full and open competition to develop the boosters based on performance requirements. Its early flights will be capable of lifting 70-100 metric tons before evolving to a lift capacity of 130 metric tons.

The early developmental flights may take advantage of existing solid boosters and other existing hardware, which will help us control costs and make early tests smoother.

The selection of the vehicle needed to transport our astronauts beyond low Earth orbit is one of the most important decisions NASA will make this decade, and it requires a major commitment on the part of the American people. That’s why we took the time to get it right.

The hard work and expertise of you in the NASA Family have brought us to this point and will be critical as we continue to do the big things only NASA can do and challenge ourselves as a people to reach our highest potential. The future is bright for exploration, and we can be proud of the major step forward we are taking today.

Click here to watch the press conference on the Senate Commerce Committee web site. The conference starts about 19 minutes into the video archive.
Posted by Stephen C. Smith at 2:45 PM