The Tortoise and the Hare

An article posted May 28 by i4 Business seems at first glance to be a cheery overview for the potential of commercial space, but if you note the quotes from one key person it suggests a new Space Race this decade.

That new Space Race would not be between the United States and the Soviet Union, but between the U.S. government and its economy.

The company, made up of space program executive veterans, managers, engineers and entrepreneurs has a business plan to offer affordable human expeditions to the moon using American aerospace systems. “We are very likely going to be operating out of the commercial launch sites along the Cape,” Stern said. “Space Florida has been influential in our thinking. We have not yet selected our launch vehicles, but all of the candidate launch vehicles fly out of the Cape.”

The company plans to begin test flights in 2017, with lunar landings to take place in either 2019 or 2020. The expeditions will be marketed to governmental agencies, companies and individuals in the U.S. with a big emphasis on targeting foreign countries for the purposes of science, commerce, tourism, entertainment and education.

“What we’re doing is making it possible for countries that don’t have space programs to have one,” Stern said. “It’s a turnkey service. It’s rather like, in the airline business, most countries don’t build their own airliners, but they can form an airline and buy from Boeing or Airbus.”

I've been skeptical of Golden Spike since their debut last December 6. Talk is cheap. Lunar human space flight is not. The Apollo program, in current dollars, cost the U.S. government about $150 billion.

But Golden Spike has been doing all the things you'd expect of a company making a serious effort to create a commercial lunar program.

On May 8, Golden Spike issued a press release announcing that Northrup Grumman had completed a lunar lander feasibility study for the company.

One week later, they announced that Apollo 13 commander Jim Lovell had joined their Board of Advisors. It's no more than symbolic, of course, but adding Lovell's name to their portfolio certain enhances their credibility.

The above quote in i4 Business reveals several clues for Golden Spike's game plan, and for their timeline.

Stern said that Golden Spike is looking at multiple launchers, but all of them “fly out of the Cape.”

That list is pretty short. This would suggest they're looking at super-heavy-lift versions of the Lockheed Martin Atlas V, the Boeing Delta IV, and the SpaceX Falcon Heavy. 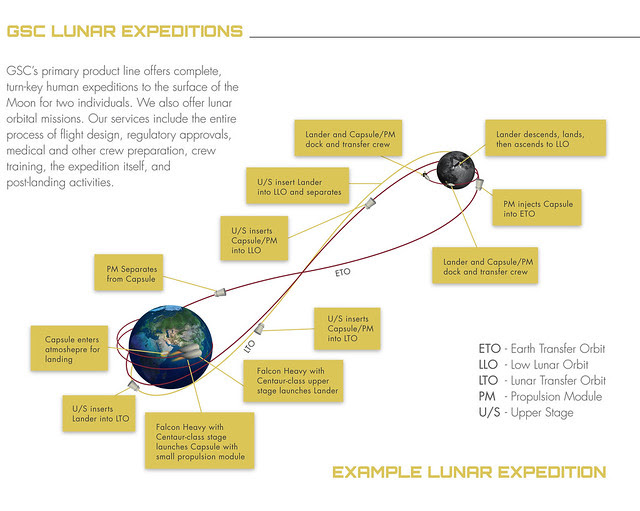 An example of a Golden Spike lunar expedition using a SpaceX Falcon Heavy as the launch booster. Image source: The Golden Spike Company. Click the image to view at a larger scale.


The above notional image on the Golden Spike web site suggests the use of two Falcon Heavy rockets — one to launch a lunar lander, the other to launch a crew vehicle.

We learned on May 17 that SpaceX may want to launch the Falcon Heavy from Launch Pad 39A at Kennedy Space Center. All six Apollo-era flights that landed astronauts on the Moon launched from 39A.

That vehicle would stack in High Bay 1 of the Vehicle Assembly Building. NASA intends to renovate High Bay 1 for commercial users.

High Bay 3, meanwhile, is being remodelled for the government's Space Launch System, which will launch from Pad 39B.

Stern's timeline for Golden Spike eerily parallels that of the SLS.

Let's assume that Golden Spike uses a Falcon Heavy with the crew version of the Dragon capsule. Although NASA has been forced by Congressional budget cuts to push back to 2017 its estimated start date for commercial crew flights to the International Space Station, SpaceX continues to state publicly that they intend to have their crew demonstration flight in 2015.

NASA hopes to launch its Orion crew capsule in September 2014 atop a Delta IV at the Cape's Launch Pad 37B. That cislunar flight would go 7,000 miles from the Earth and then plunge into the atmosphere to test the heat shield.

So Dragon and Orion will be testing around the same time in mid-decade. But the cargo version of Dragon is flying now, giving SpaceX several years' experience with the vehicle.

Stern says his company's test flights would begin in 2017, with lunar landings in 2019 or 2020. Space Launch System, hampered by the constraints of government funding and bureaucratic inefficiencies, is scheduled to have its first crewed test flight in 2021, although earlier this year in a Congressional hearing NASA Administrator Charlie Bolden said he hoped to persuade Congress to move that up to 2019.

On April 10, NASA announced the asteroid initiative, which would use a robotic spacecraft to capture and park in lunar orbit a small asteroid. The orbiting rock would serve as a destination for a 2021 crewed SLS flight.

So it's not too hard to imagine SLS and Golden Spike side-by-side in the VAB and out on the Complex 39 pads — each heading in the same direction around the same time, but different endpoints.

This can be viewed from two perspectives.

Administrator Bolden has stated several times that NASA has no plans to land on the Moon. The goal is Mars, and asteroids are the stepping stones to that destination. That decision, ultimately, is up to Congress. The legislative branch has shown no inclination to fund such an expedition. Members of Congress make noise about a lunar landing program, but they've shown no willingness to authorize or fund it.

In any case, the current administration has been quite supportive of opening space to the private sector, so they might point with pride to the brash upstart on the next pad over as proof that we can leave cislunar space to commercial companies while NASA looks further into the solar system.

Another perspective — the one I have — is that this creates a new Space Race.

In the starting gate at High Bay 3 is the SLS, a program larded by Congressional pork, dubbed the Senate Launch System by its critics. Many observers believe that it will one day fall to innate political and bureaucratic flaws, as did Constellation before it.

In the other starting gate at High Bay 1 is Golden Spike — all talk so far, but the pieces seem to be falling into place to make the company a viable lunar option. Add to the mix the May 23 teleconference discussing the NASA agreement that allows Bigelow Aerospace to ally NewSpace companies into a possible commercial cislunar program. The report hasn't been released yet, but it's logical to assume that Golden Spike is one of those companies.

As with all space programs — government or commercial, crewed or unmanned — these timelines should be viewed with the greatest of skepticism.

But we're starting to see all the pieces fall into place for the great Space Race of the 21st Century. To the victor goes access to the Final Frontier.

A related i4 Business article — “What's Next for Florida's Space Program”