This week's NASA Space to Ground reports that on July 12 the International Space Station will have been occupied for 5,000 straight days.

You can check various ISS countdown clocks on the ISS Crews and Expeditions web page. July 12 will be the 5,000th day of crew occupancy, but it will also be 5,713 days that ISS has been on orbit.

Expedition 1 launched from Baikonur on October 31, 2000 and arrived at the ISS on November 2.

The crew members were NASA astronaut Bill Shepherd, who was the first commander, and Russian cosmonauts Yuri Gidzenko and Sergei Krikalev.

Commander Shepherd kept logs while aboard, which are available on NASA's web site. Some of the contents are redacted. Other comments reveal the mundane aspect of daily life 250 miles from Earth. Take this entry from November 30:

Shep putting together the changes to the Joint Ops book for 4A. Big thanks to the planners for carving out some time to do this. It's the little things that really slow you down — like when you need a hole punch, and can't find one.

Nearly fourteen years later, two U.S. robotic ships deliver cargo to the ISS. One of them, the Orbital Sciences Cygnus, is scheduled to launch July 13 from Wallops, Virginia. Click here for the Orbital-2 press kit. 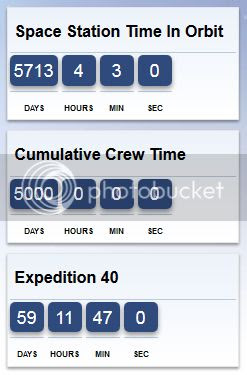