They Told You So

“We are collectively perpetrating a fraud.”

The proposed Fiscal Year 2011 NASA budget presented to Congress by the Obama administration on February 1, 2010 proposed that the Constellation program be cancelled.

Now let’s discuss the Constellation Program. The Program was planning to use an approach similar to Apollo to return astronauts to the Moon some 50 years after that program’s triumphs. The Augustine Committee observed that this path was not sustainable, and the President agrees. They found that Constellation key milestones were slipping, and that the program would not get us back to the moon in any reasonable time or within any affordable cost. Far more funding was needed to make our current approach work. The Augustine Committee estimated that the heavy lift rocket for getting to the moon would not be available until 2028 or 2030, and even then they found “there are insufficient funds to develop the lunar lander and lunar surface systems until well into the 2030s, if ever.” So as much as we would not like it to be the case, and taking nothing away from the hard work and dedication of our team, the truth is that we were not on a path to get back to the moon's surface. And as we focused so much of our effort and funding on just getting to the Moon, we were neglecting investments in the key technologies that would be required to go beyond.

So this budget cancels the Constellation Program, including the Ares I and V rockets and the Orion crew exploration vehicle. NASA intends to work with the Congress to make this transition smooth and effective, working responsibly on behalf of the Taxpayers.

Congress didn't gave a damn about the taxpayers — or the August 2009 Government Accountability Office audit which concluded that Constellation lacked “a sound business case.” The members of the space authorization and appropriations committees were more concerned about protecting the pork flowing to their states and districts from Constellation.

So in October 2010, Congress passed the National Aeronautics and Space Administration Authorization Act of 2010. Section 302 of the Act mandated that NASA build a “Space Launch System” that “can access cis-lunar space and the regions of space beyond low-Earth orbit in order to enable the United States to participate in global efforts to access and develop this increasingly strategic region.” Congress directed that NASA use existing Space Shuttle and Constellation contractors, instead of using an open competitive bid to secure the least expensive best offer. Congress resurrected the Orion capsule as the SLS crew vehicle, and for good measure told NASA what the basic design had to be.

But nowhere did Congress tell NASA what its mission would be.

If there was any doubt as to who were the true architects of the SLS, all one had to do was watch the September 14, 2011 media event where Senators Bill Nelson (D-FL) and Kay Bailey Hutchison (R-TX) revealed the system's proposed design. NASA Administrator Charles Bolden was present but, other than brief remarks, was relegated to the backrgound while various politicians strode forward to take credit. 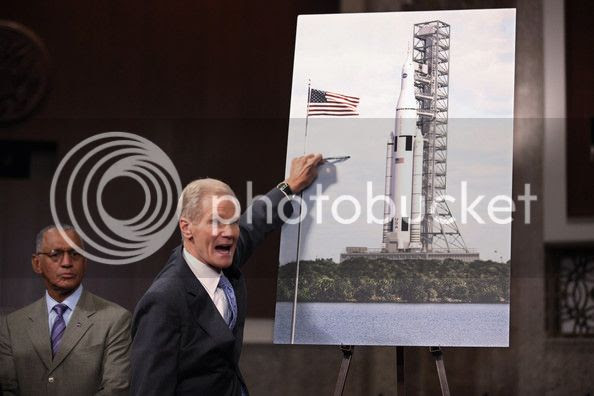 The 2010 NASA Act authorized spending for the next three fiscal years, 2011 through 2013. Over that time, NASA was to spend another $4.0 billion on Orion (beyond what had already been spent during Constellation) and $6.9 billion for Space Launch System.

Acting with due diligence, NASA hired the firm Booz Allen Hamilton to prepare an independent assessment of SLS cost and schedule estimates. The August 19, 2011 report concluded that program estimates “assume large, unsubstantiated, future cost efficiencies leading to the impression that they are optimistic. A scenario-based risk assessment, which excludes cost estimating uncertainty and unknown-unknown risks (historically major sources of cost and schedule growth), reveals all three Programs’ reserves are insufficient.”

The Programs’ estimates are serviceable and can be used for near-term budget planning in the current 3- to 5-year budget horizon. Beyond this horizon, the inclusion of large expected cost savings in the estimates, the beginning of development activities, and the potential for significant risk events decreases the ICA Team’s confidence in the estimates.

Senators Nelson and Hutchison were quite displeased.

“I talked to [Administrator] Charlie Bolden yesterday and told him he has to follow the law, which requires a new rocket by 2016,” says Sen. Bill Nelson (D-Fla.). “And . . . within the budget the law requires . . .”

“NASA must use its decades of space know-how and billions of dollars in previous investments to come up with a concept that works,” the senators say in a joint bipartisan statement. “We believe it can be done affordably and efficiently — and, it must be a priority.”

Never mind we won't give you enough money to build it. Build it anyway.

Hutchison claimed the report proved “that the SLS plan is financially and technically sound, and that NASA should move forward immediately.” But it said no such thing.

Three years later, it turns out that the independent assessment was right.

For a variety of reasons SLS/Orion spending has fallen short of the 2010 authorizations.

Including spending on ground upgrades (e.g. SLS modifications at Kennedy Space Center's Launch Pad 39B), over Fiscal Years 2011-2013 NASA actually spent about $8.9 billion on SLS and Orion, compared to the authorized $10.9 billion.

In each of those three fiscal years, Congress appropriated more money for SLS/Orion than requested by the Obama administration in its proposed annual budgets. But due to sequestration, delayed passage of those budgets, and continuing resolutions until Congress got its act together, NASA fell behind just as it had in the prior decade when Congress underfunded Constellation.

NASA maintained the polite fiction that the first uncrewed SLS test flight was on schedule for the end of 2017.

But in recent months, some NASA officials have informally hinted that the launch might slip into the 2018 calendar year. A July 2014 NASA SLS promotional document now states the launch will occur in “Fiscal 2018” (October 2017-September 2018) or just “scheduled for 2018.”

A new GAO audit released July 23 concluded that “NASA has not established an executable business case that matches the SLS program’s cost and schedule resources with the requirement to develop the SLS and launch the first flight test in December 2017 at the required confidence level of 70 percent.” The report cited inadequate funding:

The SLS program office calculated the risk associated with insufficient funding through 2017 as having a 90 percent likelihood of occurrence; furthermore, it indicated the insufficient budget could push the planned December 2017 launch date out 6 months and add some $400 million to the overall cost of SLS development.

The GAO also faulted Congress ordering NASA to use Shuttle-era technology for SLS.

The SLS program could experience additional schedule pressure if unanticipated challenges associated with using heritage hardware occur when integrating it into the launch vehicle’s operational environment and modifying manufacturing process to incorporate new materials. The use of heritage hardware — legacy engine, booster, and propulsion systems — was prescribed in the NASA Authorization Act of 2010, but the hardware was not originally designed for SLS. Therefore, the SLS program must ensure each heritage hardware element meets SLS performance requirements and current design standards prior to the 2017 test flight. Although the heritage hardware challenges have yet to affect the SLS schedule, each heritage hardware element shares the common issue of operating in the SLS environment that is likely to be more stressful than that of its original launch vehicle as well as unique integration issues particular to that element, which must be resolved prior to SLS first flight in 2017. For example, according to agency officials the engines from the Space Shuttle require additional heat shielding because of the increased temperatures they will experience in the SLS environment, and the avionics within the solid rocket boosters from the Constellation program are likely to require additional cushioning to protect them from increased vibrations. Until the core stage is demonstrated, however, the SLS operating environment can be defined only through analytical predictions. Further, eliminating asbestos as a key insulating material within the solid rocket boosters on the SLS has required changes to the booster manufacturing processes to meet safety requirements.

This is what happens when politicians think they are engineers.

Three years later, Congress still has failed to tell NASA what it's supposed to do with SLS.

Attempting to justify a use for the rocket it was ordered by Congress to build, the Obama administration proposed an Asteroid Initiative, but Congress reacted with a collective yawn.

On February 27, Rep. Lamar Smith (R-TX), chair of the House Committee on Science, Space and Technology held a hearing titled, “Mars Flyby 2021.” Smith insisted that NASA put two people in the Orion and launch them atop the SLS in 2021 so they could fly by Mars and Venus. No NASA representatives were invited. Smith did not say how he would pay for this, or what it was the crew were to do during the mission, or how they would survive the lethal doses of radiation.

(For more on this hearing, read my March 2 blog article, “Desperation Mars.”)

When it presented its Fiscal Year 2015 proposed budget earlier this year, NASA unveiled its “Human Path to Mars” graphic suggesting that SLS and Orion are part of a coordinated plan with the International Space Station, commercial cargo and commercial crew to send people to Mars in the 2030s.

According to the NASA Human Path to Mars web page:

NASA is developing the capabilities needed to send humans to an asteroid by 2025 and Mars in the 2030s — goals outlined in the bipartisan NASA Authorization Act of 2010 and in the U.S. National Space Policy, also issued in 2010.

Someone has finally had the courage to publicly call out the SLS propaganda for what it truly is.

At the top level, the response today was the same — that NASA is developing a plan that is not executable. Some members said they want to know what NASA can do with the money it can reasonably expect, while others wanted a realistic assessment of what it will actually cost to achieve the goal of getting people to Mars by the 2030s. Tom Young said he felt that “we are collectively perpetrating a fraud” by pretending the program is executable. He said he worries that the country will spend $160 billion on human spaceflight over the next 20 years and be only “negligibly closer” to landing humans on Mars. However, when [NAC Chair Steven] Squyres suggested that NAC make a recommendation that NASA publicly state what activities it would have to terminate in order to achieve the goal of humans on Mars by the 2030s absent a bigger budget, most NAC members demurred.

No one likes the asteroid mission. But it appears to be the only one that's affordable.

And while all this hypocrisy is lathered upon the taxpayers, at Kennedy Space Center's other launch pad SpaceX founder Elon Musk is investing in renovating Pad 39A for his new Falcon Heavy rocket — part of his vision to one day send humanity to Mars on privately developed and funded launch vehicles that aren't beholden to porking members of Congress.

Pad 39B awaits Space Launch System. But if you really want to go to Mars, the path runs through Pad 39A. 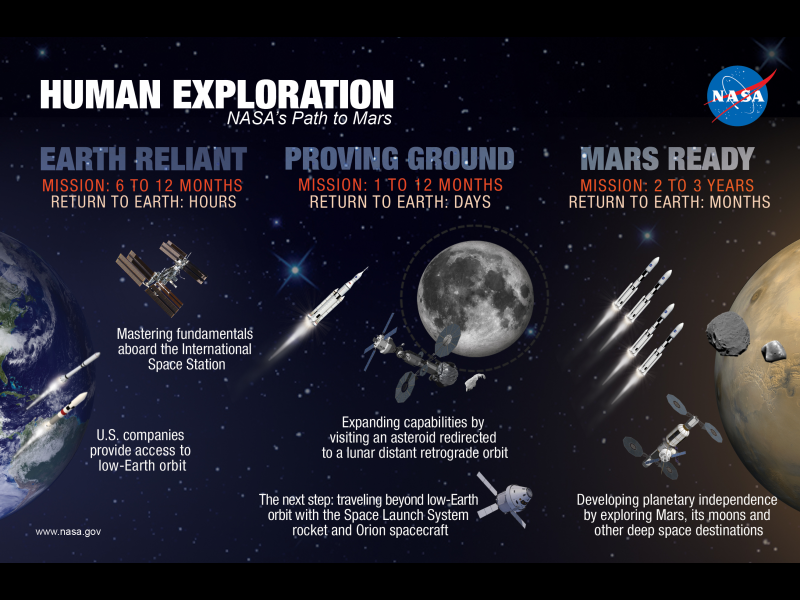