The word мир in Russian means both “peace” and “world.” Mir was chosen by the Soviet Union for the name of its first modular space station that was in low Earth orbit from 1986 to 2001.

In 1992 and 1993, after the fall of the Soviet Union, the United States and the new Russian Federation signed agreements that led to NASA astronauts staying on Mir and Space Shuttle visits, in preparation for joint operations for the planned International Space Station.

Wary of each other after decades of Cold War, the two sides slowly learned to work together and eventually became fast friends in space exploration.

The 1998 ISS agreements specify that NASA is the managing partner, but both the U.S. and Russia provided most of the station structure that orbits today.

The relationship was so close that, after the Columbia accident on February 1, 2003, NASA relied on Roscosmos for ISS crew rotations until the Space Shuttle was certified safe for flight.

When President George W. Bush announced his Vision for Space Exploration on January 14, 2004, he said that Shuttle would fly only to finish ISS construction, and then the Shuttle would be retired. Crew rotations would continue on Soyuz until a replacement vehicle would be ready.

Two weeks later, on January 28, 2004, NASA Administrator Sean O'Keefe appeared before the Senate Science Committee to detail the VSE proposal. He displayed a graphic that came to be known as the Vision Sand Chart. 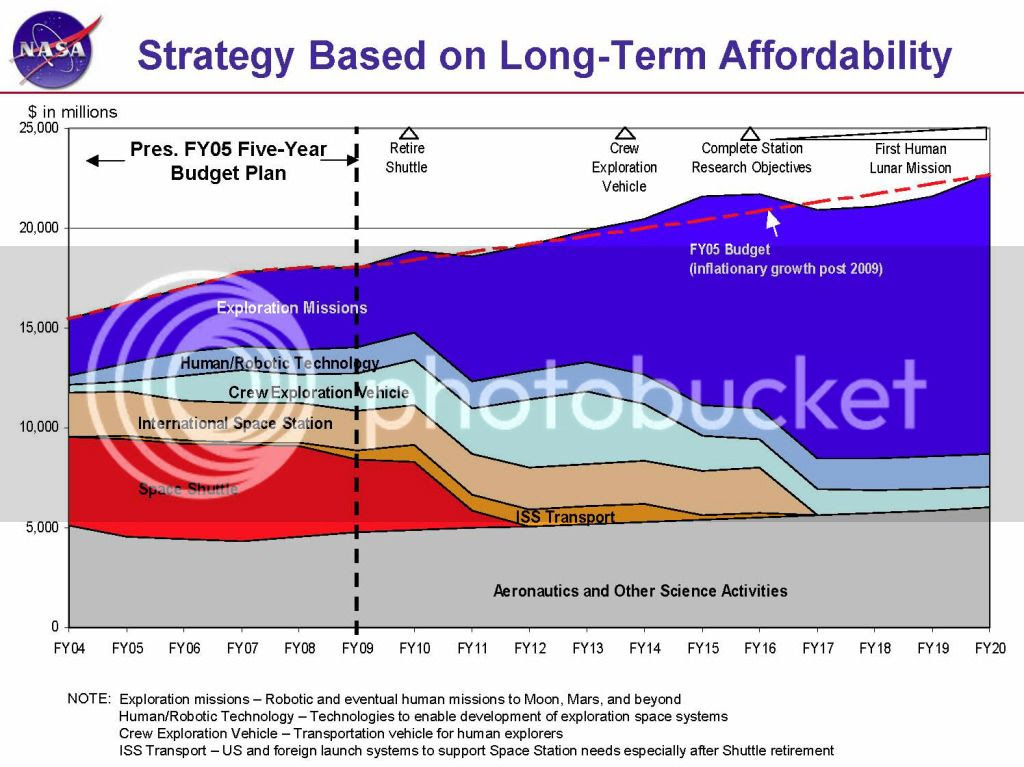 Click here to download the Vision Sand Chart from the NASA web site. The free Adobe Acrobat Reader is required.

The chart showed a four-year gap between the end of Shuttle and the first operation of the Crew Exploration Vehicle. NASA would continue to use Roscosmos for crew rotations until the CEV was ready.

No one questioned reliance on Soyuz. Relations between the U.S. and Russia were friendly, especially in space.

Over the next ten years, VSE evolved into the failed Constellation program. The Crew Exploration Vehicle became the Orion capsule, and when Congress agreed with President Barack Obama in 2010 to cancel Constellation it chose to save Orion as the crew vehicle for the new Space Launch System.

It roughly translates as, “After analyzing the sanctions against our space industry, I suggest the USA deliver their astronauts to the International Space Station with the help of a trampoline.”

While NASA bound itself in the 1990s to Roscosmos, the U.S. defense industry picked over the leftovers of their Russian counterparts. General Dynamics acquired the rights to the RD-180 engine produced by a Russian government-owned company called NPO Energomash. General Dynamics was acquired by Lockheed Martin, which now uses the reliable RD-180 as the engines on its Atlas V first stage. Atlas V launches significant military payloads, as well as NASA missions such as the Mars Curiosity rover.

Rogozin has also threatened to end shipments of the RD-180 to the United States.

Despite his threats, Russia has taken no action against NASA or United Launch Alliance, a partnership of Lockheed Martin and Boeing. Rogozin's threats have proven to be hollow, just bark but no bite. If Roscosmos failed to uphold its responsibilities under the ISS agreement, they would become a space pariah, and no other nation would trust them again. ULA is the only customer Russia has for the RD-180, so if Russia failed to ship the RD-180s then NPO Energomash loses its only customer and Mr. Rogozin has to find new jobs for all those people.

If one assumes that an international leader is acting rationally, then rationally it would make no sense for Russia to self-destruct its aerospace program.

But events of the last twenty-four hours have us wondering if Russia is acting rationally.

The details of the story are still unclear, but it appears that a Russian Бук (Buk, Russian for “beech”) surface-to-air missile system was used to shoot down a commercial airliner over Ukraine.

The preliminary evidence suggests that Russian separatists, perhaps acting in loose alliance with a Russian military official, fired on Malaysian Airlines Flight 17 in the mistaken belief it was a Ukrainian military cargo plane.

One Russian media report laughingly implied that Ukraine mistakenly hit MH17 after aiming at Putin's plane, and Putin himself blamed Ukraine for actions against the separatists in its own territory.

UPDATE July 18, 2014 — Courtesy of the Internet Archive Wayback Machine, here is the Russia Today article that claimed Ukraine was shooting at Putin's plane. It was soon deleted, but Wayback Machine archived it first.

Putin and Obama talked by phone yesterday right after the incident. The conversation had been previously scheduled to discuss new sanctions imposed earlier this week by the United States after Russia began to escalate its forces again near eastern Ukraine.

Hopefully Mr. Putin hasn't gone so far 'round the bend that he ordered his military to shoot down a commercial airliner in retaliation.

But it also seems implausible that Russia would simply hand over a Buk system to separatists without a degree of control. The weapon could one day be turned against Russian interests.

In any case, these breaking events stress the importance of the United States accelerating its divorce from the Russian aerospace industry.

The above video is of a July 16 joint hearing of the Senate space and armed services committees to discuss assuring “domestic space access.” Given the incident in the skies over Ukraine, it's time for Congress to accelerate funding of commercial crew to get NASA back on American vehicles as soon as possible. The same goes for a domestic replacement for the RD-180.

The Russian people are not to blame. Vladimir Putin, Dmitri Rogozin, and their oligarch cronies are to blame.

But the reality is that the Putin regime no longer may be acting rationally. And that means that the U.S. may need to re-evaluate flying crew with Russia until its government shows it can behave responsibly in a civilized world.