After issuing its Commercial Orbital Transportation Services (COTS) request for proposals in January 2006, NASA received 21 proposals from 20 companies for delivering cargo to the International Space Station.

In February 2014, NASA published Commercial Orbital Transportation Services: A New Era in Spaceflight, a comprehensive final report on the history and success of the COTS program.

According to page 28 of the report:

Scott J. “Doc” Horowitz, the Selection Authority at NASA Headquarters for the COTS Space Act Agreements, described the proposals as ranging from “somebody [who] was going to build a rocket engine in their garage” to some that offered to conduct a study without building any physical hardware, and “everything in between.”

The companies ranged from major names in the aerospace industry such as The Boeing Company and Lockheed Martin Corp. (which submitted two proposals, one for all four capabilities, and one for only Capability B), to established but smaller-scale launch companies such as Orbital Sciences Corp., to littleknown startups such as PanAero Inc. and Venturer Aerospace.

The six finalists were:

Why none of the legacy aerospace companies made the finalist list isn't stated, but an explanation can be found on page 22:

The COTS program aimed specifically to allow small startup ventures the chance to compete in NASA procurements, in addition to the group of large, established contractors that usually dominated major NASA spaceflight contracts. Many of the companies interested in participating in NASA’s new program belonged to what was dubbed the NewSpace community of space entrepreneurs and supporters who actively worked to promote the development of commercial spaceflight. Several provisions of the COTS [Space Act Agreements] were deliberately crafted to allow companies of all sizes to participate.

Page 29 of the report notes, “Significantly, none of the selected companies represented the major names in the industry with decades of government contract experience, but rather exemplified the emerging NewSpace community.” 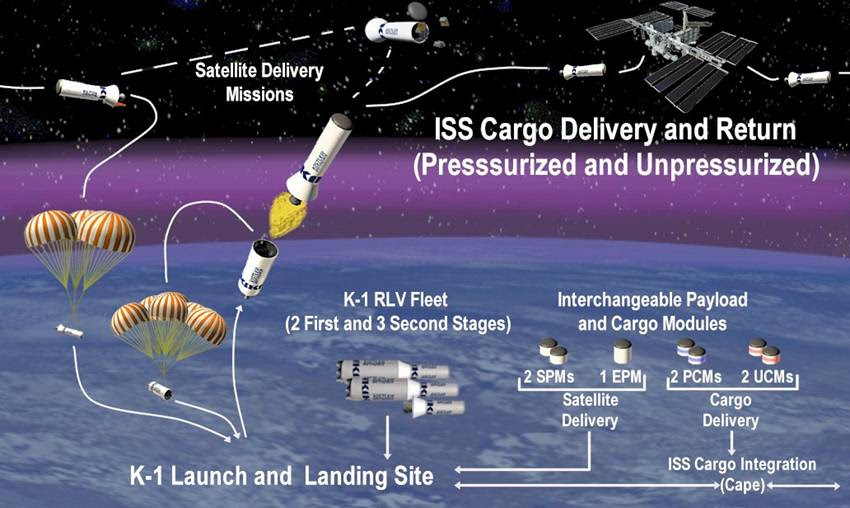 This didn't happen — a Rocketplane Kistler concept of operation. Click the image to view at a larger size. Image source: NASA.

SpaceX and Rocketplane Kistler won the first two contracts in August 2006, but RpK was booted from the program in October 2007 after it failed to achieve early milestones. NASA replaced RpK with Orbital Sciences, a 25-year old aerospace company specializing in small and medium-class systems for government and commercial customers.

Orbital also became the first commercial company to have a failure, when on October 28, 2014 the Antares booster exploded a few seconds after launch. An official cause has not been announced.

But the idea of choice in commercial providers proved its worth, because NASA and its payloads moved over to future flights of the SpaceX Dragon.

Orbital has required new Russian RD-181 engines for Antares, but until the rocket is certified the Cygnus will launch on United Launch Alliance Atlas V boosters from the Cape.

In November 2014, NASA announced a new round of competitive bidding for commercial cargo. According to the press release:

Under the Commercial Resupply Services 2 RFP, NASA intends to award contracts with one or more companies for six or more flights per contract. As with current resupply flights, these missions would launch from U.S. spaceports, and the contracted services would include logistical and research cargo delivery and return to and from the space station through fiscal year 2020, with the option to purchase additional launches through 2024.

Proposals were due by November 14, 2014. A complete list of bidders hasn't been released, although according to the press release NASA anticipates making a decision by May 2015.

When COTS began in January 2006, it's reasonable to assume few took the program seriously. The ISS was five years away from completion. The flagship mission for NASA, as proposed by President George W. Bush on January 14, 2004, was not commercialization of space but a new big government human spaceflight program called Constellation. COTS was to deliver cargo to ISS, while the Constellation Ares I would deliver crew. The Bush administration projected ending the ISS by 2016 to pay for Constellation Ares V flights beyond Earth orbit, so the need for commercial supply services was probably considered temporary at best before the government reasserted its spaceflight monopoly.

But a funny thing happened on the way to splashing ISS into the Pacific Ocean.

The Obama administration saved it.

Congress finally agreed to officially cancel Constellation in early 2011. The ISS was saved, and funding flowed to both commercial cargo and commercial crew. The latter had been on the books since the Commercial Crew and Cargo Program Office was founded in November 2005, but never funded.

The result is that the commercial environment in 2015 is vastly improved from ten years ago.

SpaceX and Boeing, the two commercial crew contractors, have deals to deliver crew not only to ISS but also the Bigelow Aerospace expandable habitats scheduled to launch in 2018.

The Bigelow Expandable Activity Module (BEAM), a prototype, was delivered March 12 to NASA. It will launch on the SpaceX CRS-8 delivery flight, currently scheduled for September. The BEAM will be berthed at ISS for two years to demonstrate the technology.

NASA executives in recent years have stated they believe the ISS will be phased out in the mid-2020s as Bigelow stations become more established.

So that may explain why OldSpace legacy aerospace companies are publicly releasing their proposals to compete with SpaceX and Orbital.

Boeing announced in December 2014 that the company would offer NASA a cargo version of their CST-100 commercial crew capsule. According to a March 9 Aviation Week article:

The cargo CST-100 also would offer unpressurized "upmass" to the International Space Station (ISS) in its throwaway service module, using space freed up by the removal of launch-abort engines and other hardware that would be unnecessary in the absence of a crew. A win in the CRS-2 bidding would lower the cost of both the crew and cargo versions of the commercial space capsule, Boeing says ...

On the outside, the cargo-version CST-100 will be largely indistinguishable from the crew version that Boeing is building under its contract with NASA, which is potentially worth $4.2 billion for six flights to the ISS. The cargo craft will have the same outer mold line, expendable service module and solar arrays for power. Inside the crew cabin, though, the displays, seats and life support system will be removed and replaced with a cargo pallet able to handle at least 2,500 kg (5,500 lb.) of food, clothing and hardware for the orbiting outpost.

The four large hypergolic launch abort system engines in the service module will be removed, making room for unpressurized cargo, and half of the 24 orbital maneuver and control engines will be pulled as well because they won’t be needed to pull a crew away from a failing Atlas V launch vehicle. In that sense, the Boeing cargo vehicle will have the same sort of capability as the unpressurized "trunk" now unique to the SpaceX Dragon cargo carrier.

Unlike the Dragon, which returns to a water landing, the CST-100 cargo carrier would return to dry land with a combination of parachutes and airbags to cushion the impact.

Lockheed Martin announced on March 13 a more intricate system billed as a “solution.”.

According to the Lockheed Martin press release:

The Jupiter spacecraft builds upon the design of MAVEN, now in orbit around Mars, and OSIRIS-REx, currently under construction for an asteroid sample return mission. The Exoliner container is based upon teammate Thales Alenia Space’s cargo carrier used on the Automated Transfer Vehicle. The robotic arm, built by teammate MacDonald Dettwiler and Associates, draws from technology used on the International Space Station and the Space Shuttle for more than 30 years.

The Lockheed Martin CRS-2 solution brings many affordability benefits with it. Not only does it employ a reusable spacecraft and create the option to host commercial payloads, it’s also designed to support future exploration missions in deep space. Jupiter and the Exoliner cargo carrier can be pre-positioned with supplies of food, fuel, water and equipment for astronauts to use as they travel on manned missions farther into space than ever before.

Four days later, on March 17, Sierra Nevada announced a cargo version of Dream Chaser that some have suggested looks like something Batman might fly.

The promotional video shows Dream Chaser perched atop either a United Launch Alliance Atlas V or a European Ariane 5. In January 2014, Sierra Nevada and the European Space Agency signed an agreement to explore developing an ESA version of Dream Chaser.

The video ends by showing Dream Chaser landing on a runway, then being unloaded like any other cargo delivery plane at a commercial airport. In April 2014, Sierra Nevada announced a deal to explore landing at Houston's Ellington Field, which is seeking certification as a commercial spaceport. It's not hard to visualize Dream Chaser returning ISS cargo to NASA's doorstep at Johnson Space Center.

In July 2014, Sierra Nevada announced an exploratory deal as well with the Japanese Aerospace Exploration Agency for a JAXA Dream Chaser.

And just to make things a little more interesting, I'll note that a sizable contingent from the Japan Manned Space Systems Corporation was in attendance at the Bigelow BEAM media event. JAMSS is a systems integrator for utilization of the Japanese Experiment Module (JEM) known as Kibo on the ISS. Japan has a memorandum of understanding (MOU) to explore use of a Bigelow habitat.

OldSpace legacy aerospace companies are notorious for refusing to invest money in their programs unless a government pays for it. Those days are ending, so it will be interesting to see how much money Boeing, Lockheed Martin and Sierra Nevada are willing to pour into developing their commercial cargo vehicles if NASA doesn't pay for most or all of it.

For those with a long view, the future isn't ISS.

All this is happening because the Obama administration took seriously the promise of commercial space.