Eric Berger of Ars Technica published January 27 a story about NanoRacks planning to add a commercial airlock at the International Space Station.

NanoRacks is proposing to build a large, half-cylinder-shaped airlock about two meters in diameter and 1.8 meters long. The airlock would attach to the end of the station’s Node 3 module, near the cupola. It would connect via a common berthing mechanism, or CBM, and then be pressurized. After pressurization, the hatch could be opened and the airlock configured for various tasks.

The airlock would launch in the trunk of a SpaceX cargo Dragon sometime in 2018, according to the report. 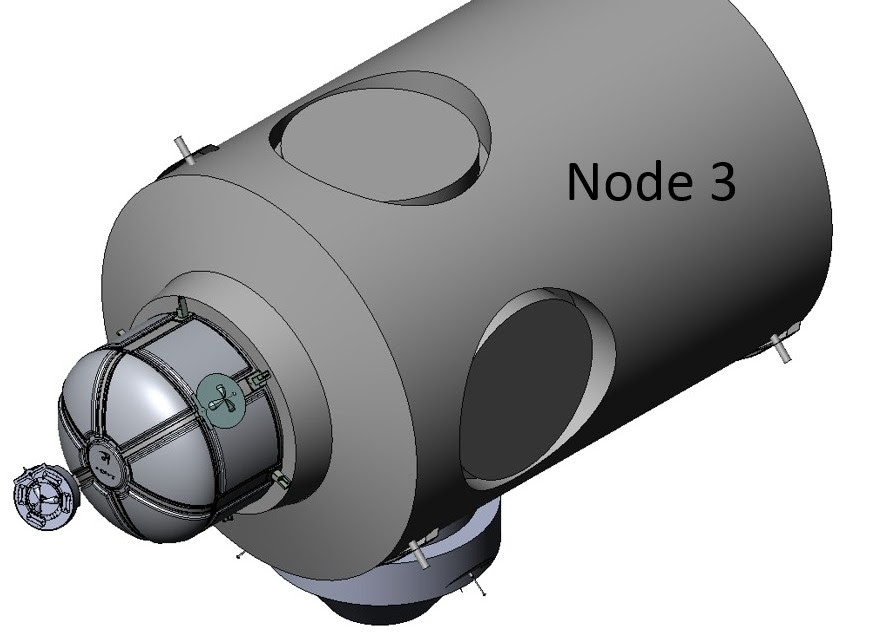 The NanoRacks airlock would attach to the end of the Node 3 airlock. Click to see additional images in the original article. Image source: Ars Technica.

Eric Berger writes that “The $12 million-15 million airlock would also allow NASA to bring in costly large pumps and storage tanks for repairs rather than disposing of them.”

In January 2014, the Obama administration announced its intention to extend the ISS to 2024, four years beyond the existing agreement among the fifteen partner nations. As of this writing, all partners except the European Space Agency have agreed to the extension, and ESA is working through the formalities.

Extending the ISS to 2024 helped convince the NewSpace industry that there won't be a repeat of 2004, when the Bush administration announced its intention to end the station in Fiscal Year 2016 to fund what came to be known as Constellation. That administration chose to phase out university and commercial microgravity research in favor of research geared towards long-duration human spaceflight to the Moon and eventually to Mars. Principal investigators who were trying to raise money to fund ISS research felt betrayed by the NASA bureaucracy, and that distrust has lingered for years.

The multi-million dollar commitment by NanoRacks to add a new portal signals that the private sector now feels confident ISS will remain available for at least another ten years, if not longer.

Informal comments in recent years by NASA executives have suggested that the agency hopes to phase out its involvement with ISS by the middle of the 2020s, prioritizing human deep space flight with the Space Launch System and Orion capsule. Some have said they would like to find a commercial entity to take over station operations.

The NanoRacks announcement seems to be a first step in station commercialization.

But the key to continued ISS operation will be the viability of the Bigelow Aerospace expandable habitats. The first modules are being built now in North Las Vegas.

A prototype, the Bigelow Expandable Activity Module (BEAM), is scheduled to launch to the ISS on the SpaceX-8 delivery planned for March 2016.

If Bigelow's expandable technology proves viable, it may be more cost-efficient for the private sector to operate those habitats instead of trying to maintain an aging steel and aluminum structure. The first ISS module was launched in 1998, meaning that by the middle of the 2020s some station parts will be over 25 years old.

SpaceX may be the most publicly visible disruptive technology in the NewSpace industry, but in my opinion Bigelow and NanoRacks are the other two big pieces of the NewSpace equation. Commercial customers need a means of shipping their experiments to microgravity. SpaceX, Orbital ATK and soon Sierra Nevada Corporation will provide cargo transportation options, but NanoRacks will handle the actual shipping and deployment technology. Bigelow may offer a commercial laboratory free of government regulation and political interference.

In February, the St. Thomas More Academy STMSat-1 will be deployed by NanoRacks from the station. The Arlington, Virginia grade school raised $50,000 to build its own communications satellite. The video at the top of this article depicts the CubeSat deployer that will launch STMSat-1.

By 2024, many of the students in the educational programs supported by NanoRacks will be entering their university years, or perhaps already graduated with a degree in the STEM fields — science, technology, engineering and mathematics.

Those graduates will have on their résumé a microgravity science mission they flew during their education thanks to NanoRacks.

It's an investment in this nation's future spacefaring economy that would have been lost if the ISS had been splashed in this fiscal year, as planned by the Bush administration.

The proposal by NanoRacks could be the first time a private company owns, designs and builds a complicated element of the space station. Until now, private companies have mostly owned research hardware to hold experiments.

“It's a big deal,” said Mike Read, manager of the space station's National Lab Office. “It hasn't been done before.”

The space station has an airlock in the Japanese Experiment Module called Kibo that currently deploys satellites and places experiments outside the station, but it can't keep up with demand. The airlock is opened only 10 to 12 times a year because of logistical constraints.

Read said the airlock's ability to deploy cubesats — small satellites that weigh about 2 pounds and are roughly 10 centimeters wide, long and tall — was an unexpected success.

“That created a demand we didn't see coming,” he said.

NanoRacks plans to create a larger airlock that will hold five times the volume. The goal is to get more commercial projects into space while also helping NASA and other government agencies meet their needs.