Much of what comes out of Russian media should be treated with a bit of skepticism, but the report did cite as its source Sergei Krikalev, a distinguished cosmonaut who now is the director of their human spaceflight program.

During an August 15 media event to discuss Friday's ISS spacewalk, NASA officials confirmed that they've been notified Russia is contemplating a downsize.

In the reality-based world, NASA partners Boeing and SpaceX are in uncrewed tests with two capsules that will each transport four crew members to the ISS. SpaceX on paper is scheduled for its first crewed test flight in August 2017, while Boeing is scheduled for February 2018.

A big symbolic step was taken yesterday towards resuming human spaceflight on the Space Coast.

The Crew Access Arm was installed August 15 at Launch Complex 41, operated by United Launch Alliance. Their Atlas V rocket will be the booster for Boeing's CST-100 (AKA Starliner) commercial crew capsule scheduled to launch its first crewed test flight in February 2018.

Another big step comes on Friday August 19, when International Space Station astronauts Kate Rubins and Jeff Williams perform a spacewalk to install the International Docking Adapter. The commercial crew vehicles from Boeing and SpaceX are only compatible with the IDA, a new NASA standard.

The first IDA was destroyed when SpaceX CRS-7 exploded two minutes after launch on June 28, 2015. Rubins and Williams will install IDA-2. A third, designated IDA-3, is being assembled from spare parts.

Posted by Stephen C. Smith at 8:00 AM No comments: 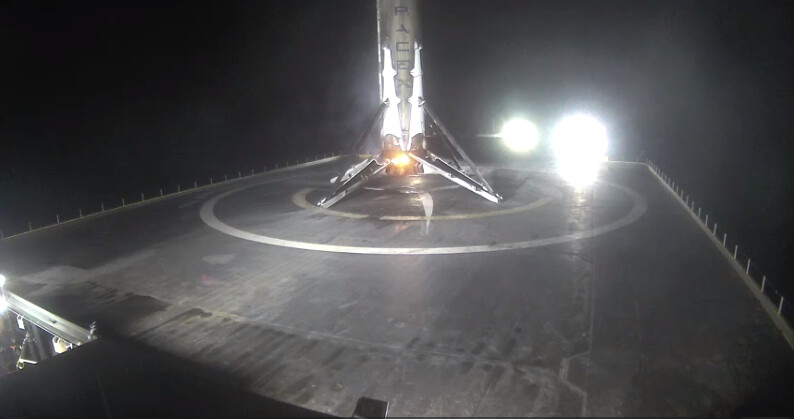 Launching rockets is never routine, but SpaceX launched the Japanese communications satellite JCSAT-16 early this morning without incident on time at 1:26 AM EDT. Minutes later, the Falcon 9 first stage landed on the SpaceX drone ship in the Atlantic Ocean, pretty much smack-dab on the "X" in the middle of the deck.

As Peter B. de Selding of Space News reports, it's the eighth launch of 2016 for SpaceX, but nine more remain on the company's crowded manifest for the year.

Posted by Stephen C. Smith at 6:46 AM No comments:

Behind schedule, but the summer rains have finally arrived on the Space Coast.

On August 7 I took a drive up Space Commerce Road to photograph the current state of the project. You'll see some flooding in the photos, but that's normal for this time of year.

All below images are copyright © 2016 SpaceKSC.com. The images may be used elsewhere with attribution. Click the image to view at a larger size.

This project is across the street from the main construction. It's outside the KSC Reutilization, Recycling, and Marketing Facility, known to locals as Ransom Road. Not sure what its purpose will be.

Meanwhile, across the street ...

It's hard to tell, but in the background is a large excavated pit. Right now it's filled with water due to the rains.

Posted by Stephen C. Smith at 7:32 AM No comments:


Click the arrow to watch a Falcon 9 landing from an onboard camera. Video source: SpaceX YouTube channel.

One could make a living off documenting all the fibs spewed by Donald Trump — in fact, many have — so there's no need for me to endlessly write about what comes out of his mouth.

The Republican presidential nominee was in Florida yesterday, up the road from the Space Coast in Daytona Beach, where he touched on the U.S. space program.

According to Ars Technica and other sources, Trump compared the U.S. space program to “a third world nation.”

NASA is the managing partner of the International Space Station. Two commercial cargo ships deliver payload to the ISS, the SpaceX Dragon and the Orbital ATK Cygnus. By the end of the decade, Sierra Nevada Corporation will add the Dream Chaser spaceplane to the fleet. SpaceX and Boeing are in the middle of uncrewed flight tests for their commerical crew vehicles, with the first SpaceX crewed test flight on paper scheduled for August 2017.

In 2012, Roscosmos General Director Vladimir Popovkin and cosmonaut Gennady Padalka warned that Russia's space program was falling behind the United States. Popovkin told a group of students in a public meeting, “We will become uncompetitive in the next three or four years if we don’t take urgent measures.”

In November 2015, Trump told a ten-year old child that he'd rather spend NASA money on potholes. In a May 2016 written response to a questionnaire from Aerospace America, Trump replied, “What we spend on NASA should be appropriate for what we are asking them to do. ... Our first priority is to restore a strong economic base to this country. Then, we can have a discussion about spending.”

Trump's space absurdities are nothing new to local Republican politics.

During last month's Republican National Convention, retired astronaut Eileen Collins misled attendees and viewers by claiming that the U.S. is somehow an also-ran in global space affairs. In February, she falsely claimed in congressional testimony that the 2010 decision to cancel the botched Constellation program was made “behind closed doors” and called NASA's leadership “cowardly.”

In March 2011, Space Coast congresswoman Sandy Adams falsely claimed that “the Obama Administration's budget willingly ceded that leadership to China, Russia and India — countries that understand the importance of human space exploration. We cannot continue to accept this administration's assault on American exceptionalism and world leadership.”

By ceding our leadership to other nations such as China, Russia, and India we would be literally giving them the ultimate military high ground.

China and Russia have announced plans to colonize the Moon — they are not going there to collect and study rocks like we did.

Here we are more than five years later, and none of those countries has an active Moon colonization program.

In the reality-based world, yesterday the Federal Aviation Administration approved a request by Moon Express to launch a commercial spacecraft/lander to the Moon. According to a Moon Express press kit, the company hopes to launch its payload in 2017.

NASA and SpaceX have announced a joint mission to Mars in 2018. Called Red Dragon, the program would send an uncrewed version of the SpaceX Dragon capsule to a soft landing on Mars.

Where are the commercial programs in other nations sending spacecraft beyond Earth orbit?

To his credit, 2012 Republican presidential Newt Gingrich delivered a speech in Cocoa, Florida where he proposed a commercial competition to create a moon base. In February 2010, Gingrich and retired Republican congressman Robert Walker endorsed President Obama's strategy to commercialize space access. Rival candidate Mitt Romney mocked Gingrich's space proposal, saying he would fire anyone who came to him with a moon base proposal.

Romney won the Florida Republican primary, 46.4% to 31.9% for Gingrich. Romney, of course, went on to win the Republican nomination before losing to Obama in November 2012.

Gingrich is now a Trump ally and reportedly was on Trump's short list for a vice-presidential running mate. As of this writing, Gingrich still stands by Trump although he has distanced himself from the candidate's statements about Arizona senator John McCain.

On the Democrat side of the ledger, the Hillary Clinton campaign has said little about space, other than an oft-told story about dreaming as a child to be an astronaut. Retired astronaut Mark Kelly spoke at the Democratic National Convention, but he was in the company of his wife Rep. Gabrielle Giffords to endorse Clinton and urge gun control measures.

Posted by Stephen C. Smith at 6:58 PM No comments:

On the Road Again

For all its badass 21st Century rocketry, SpaceX has a knack for repurposing Space Shuttle-era NASA artifacts.

The Orbiter Transporter System was used during the Space Shuttle era to transport Shuttle orbiters from one of Kennedy Space Center's Orbiter Processing Facility hangars to the Vehicle Assembly Building.

According to this 2007 NASA article, the OTS was originally built in the 1980s to move around orbiters at Vandenberg AFB in California, when the Department of Defense planned to launch military Shuttle missions on the West Coast. After that plan was cancelled, the OTS was transferred to KSC in 1989.

After the Shuttle program ended in 2011, the OTS was last used in November 2012 to transport Atlantis to the Kennedy Space Center Visitor Complex.

The General Services Administration auctioned the OTS in May 2014. According to the GSA web site, SpaceX purchased it for $37,075.

SpaceX modified the OTS and is now using it to transport landed Falcon 9 first stages.

Below are images of the OTS parked outside the SpaceX hangar this morning at Kennedy Space Center's Pad 39A. Images may be used elsewhere if credit is given to SpaceKSC.com. Click the image to view at a larger size.