Pedal to the Metal

Harvard University scientists have announced they created metallic hydrogen in a laboratory.

Metallic hydrogen is thought to be a superconductor, meaning it could conduct electricity without any resistance. Electricity traveling through normal circuits loses energy to resistance overtime, often in the form of heat. This is why it is harder to send electrical currents (say, through the electricity grid) over long distances than short ones. But a current traveling through a superconducting material loses nearly zero energy.

NASA partially funded the study, as metallic hydrogen has potential use as a rocket fuel. Isaac Silvera, the Harvard University researcher who published the paper, is quoted on the NASA web site:

Atomic metallic hydrogen, if metastable at ambient pressure and temperature could be used as the most powerful chemical rocket fuel, as the atoms recombine to form molecular hydrogen. This light-weight high-energy density material would revolutionize rocketry, allowing single-stage rockets to enter orbit and chemically fueled rockets to explore our solar system. To transform solid molecular hydrogen to metallic hydrogen requires extreme high pressures, but has not yet been accomplished in the laboratory. In the proposed new approach electrons will be injected into solid hydrogen with the objective of lowering the critical pressure for transformation. If successful the metastability properties of hydrogen will be studied. This new approach may scale down the pressures needed to produce this potentially revolutionary rocket propellant. 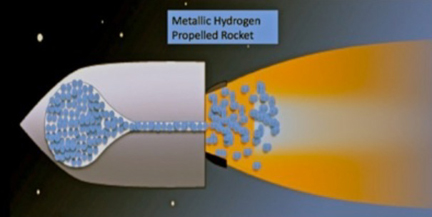 Not everyone believes the Harvard team was successful. According to Engadget, “Other scientists have reservations, saying it's possible the solid material they created is actually aluminum oxide that came from the anvil's diamond tips.”

In 2011, researchers at the Max Planck Institute in Germany announced they had converted hydrogen to “a conductive and metallic state.” Silvera and others questioned the findings.

(Note to climate change deniers ... This is how science works. Peer review. The data are real. Your denials are not.)

Silvera presented a lecture on his work in March 2012 at the NASA Innovative Advanced Concepts (NIAC) Spring Symposium in Pasadena, California. Click here for his PowerPoint presentation. You can also watch a video of his presentation, but the audio is very poor.


Click the arrow to watch Dr. Silvera's presentation on metallic hydrogen as a rocket fuel. Turn up your volume as high as you can! Video source: Dept of Physics & Astronomy at the University of Utah youTube channel.

You can also read this 2010 paper by Silvera on metallic hydrogen as a source for rocket fuel.

NASA believes that metallic hydrogen may exist at the core of the planet Jupiter. According to the NASA Juno probe press kit web site:

Deep in Jupiter’s atmosphere, under great pressure, hydrogen gas is squeezed into a fluid known as metallic hydrogen. At these enormous pressures, the hydrogen acts like an electrically conducting metal, which is believed to be the source of the planet’s intense magnetic field. This powerful magnetic environment creates the brightest auroras in our solar system, as charged particles precipitate down into the planet’s atmosphere.

A cutaway image of Jupiter's core. Click the image to view at a larger size. Image source: NASA.

Posted by Stephen C. Smith at 8:08 AM No comments:

The transporter/erector was out on Pad 39A today as I drove past in a tour bus. The yellow construction crane present at the pad for so long has been moved away and partially dismantled.

All this suggests SpaceX may be closer to operational status.

These images were shot with a smartphone from a moving bus, so they are what they are. Click an image to view it at a higher resolution. All images in this article are copyright © 2017 Stephen C. Smith. Use elsewhere is permitted if credit is given to SpaceKSC.com.

Posted by Stephen C. Smith at 8:36 PM No comments:

Click an image to view it at a higher resolution. All images in this article are copyright © 2017 Stephen C. Smith. Use elsewhere is permitted if credit is given to SpaceKSC.com.

According to media reports, SpaceX may attempt soon its first launch from Kennedy Space Center's Pad 39A, so it's time to take another photo trip around the pad.

Most noticeable in recent weeks is the removal of parts of the former Shuttle-era rotating Service Structure. The Payload Changeout Room is being dismantled. It was an enclosed environmentally controlled room where payloads could be transferred into the orbiter's payload bay from a canister transported from the space center's industrial area. 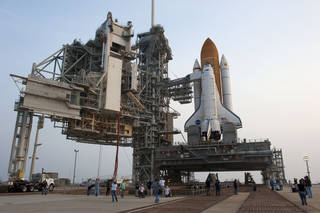 The payload canister being lifted on June 17, 2011 into the Payload Changeout Room for transfer to Atlantis for the final Shuttle mission. Image source: NASA.

These images were taken on January 15, 2016. As always, use elsewhere is permitted if credit is given to SpaceKSC.com. Click on an image to see it at a larger size.

Can you find the bobcat in the grass?

The bobcat about to enter the undergrowth.

Here are links to images in earlier articles:

Posted by Stephen C. Smith at 8:27 PM No comments:

An image released December 6, 2016 of an artist's concept of the Blue Origin administrative office and factory. Click the image to view at a larger size. Image source: Blue Origin.

The last time I posted photos of the Blue Origin construction site was October 30, 2016. One structure since then seems to have finished its outer walls, while the second is taking shape.

Blue founder Jeff Bezos released the above illustration in December showing what the main building will look like. This is the one facing Space Commerce Road.

The site is accessed by four entrances, labelled with big signs "A" through "D."

Here are photos I took today of the site from Space Commerce Road, driving from southeast to northwest.

You're welcome to use these images elsewhere, just credit SpaceKSC.com. Click an image to view at a larger size.

The power plant across the street and south of the main building.

Posted by Stephen C. Smith at 5:48 PM No comments:

As the eight years of President Barack Obama's administration come to an end, let's look back at some significant space moments during his two terms.

August 2, 2008 ... Democratic presidential candidate Barack Obama delivers a space policy speech in Titusville. What he said here would be misstated and falsified during the next eight years of his administration.

July 30, 2009 ... The Review of U.S. Human Spaceflight Plans Committee holds a public hearing in Cocoa Beach, Florida. Their October 22, 2009 final report would lead the Obama administration to propose the cancellation of the Constellation program.

April 15, 2010 ... President Barack Obama in Kennedy Space Center's Operations and Checkout (O&C) building to deliver a space policy speech that called for the United States to focus on Mars as the destination for human spaceflight. Click here to watch the speech in its entirety.

May 12, 2010 ... Apollo-era astronauts Gene Cernan (center) and Neil Armstrong (left) testify before the Senate Science Committee to oppose President Obama's space policy. Click here to watch the hearing. Cernan accused the President and NASA executives of “a calculated plan to dismantle America’s leadership in the world of Human Space Exploration.”

June 30, 2010 ... NASA Administrator Charlie Bolden is interviewed on Al Jazeera about his Middle East trip. His comments were quoted out of context by conservative web sites to distort the reason for the trip. Click here to watch the entire interview in context.

April 29, 2011 ... President Obama and his family tour KSC's Orbiter Processor Facility. The Obama family came to watch the launch of STS-134 Endeavour but the launch was cancelled due to an electrical problem with the orbiter's hydraulic power system. The last sitting President to visit KSC twice during his administration was Lyndon Johnson in the 1960s.

July 21, 2011 ... NASA Deputy Administrator Lori Garver beneath the orbiter Atlantis after its landing at Kennedy Space Center on July 21, 2011. Commander Chris Ferguson is now the Director of Crew and Mission Operations at Boeing, and may be aboard its first commercial crew flight scheduled for 2018.

September 14, 2011 ... Joined by other members of Congress, Senator Bill Nelson (D-FL) unveils the design for Space Launch System. NASA Administrator Charlie Bolden was limited to a few comments while the elected officials took credit for protecting jobs in their districts and states. Click here to watch the media event.

February 7, 2012 ... President Obama watches as a White House Science Fair participant launches a marshmallow from an “Extreme Marshmallow Cannon.” Obama began the annual science fairs in 2010, and hosted his last fair on April 13, 2016.

May 12, 2012 ... The SpaceX Dragon becomes the first commercial spacecraft to berth at the International Space Station.

August 6, 2012 ... NASA's Curiosity rover lands on the surface of Mars. This image, released November 1, 2012, is a self-portrait using multiple images taken with the robot's arm.

March 5, 2014 ... SpaceX founder Elon Musk (center) and United Launch Alliance Chief Executive Officer Michael Gass (left) testify before the Senate Appropriations Defense Subcommittee. Musk argued that ULA's military launch monopoly should end, and that SpaceX could do it for far cheaper. Gass announced on August 12, 2014 that he was leaving the company, to be replaced by Tory Bruno.

October 28, 2014 ... The Orbital Sciences Antares fails seconds after launch at Wallops, Virginia. The Orb-3 mission Cygnus cargo craft is destroyed. It's the first failure in the commercial cargo program, but wouldn't be the last.

October 31, 2014 ... Three days after Orbital's loss, Virgin Galactic loses VSS Enterprise in a breakup over the Mojave Desert. The investigation blamed the co-pilot for prematurely unlocking a safety system. The co-pilot died, but the pilot survived after ejecting from the craft.

December 5, 2014 ... NASA's Orion crew capsule is retrieved from the Pacific Ocean after its test flight. The uncrewed Exploration Flight Test 1 (EFT-1) was the first NASA crew vehicle sent beyond Earth orbit since Apollo 17 in December 1972.

May 6, 2015 ... SpaceX conducts a pad abort test of its crew Dragon from Pad 40 at the Cape. The test was considered successful.

May 18, 2015 ... Dava Newman succeeds Lori Garver as NASA Deputy Administrator. In this 2012 image, Newman models a “BioSuit” designed by her team at the Massachusetts Institute of Technology. She hopes it will be a model design for a human expedition on the surface of Mars.

June 28, 2015 ... The SpaceX CRS-7 cargo Dragon is destroyed about 2½ minutes after launch when an upper stage helium bottle strut fails. Both commercial cargo vehicles were grounded until SpaceX CRS-8 launched in April 2016.

July 14, 2015 ... NASA's New Horizons probe flies past the dwarf planet Pluto. When it launched from Cape Canaveral on January 19, 2006, Pluto was still a full-fledged planet. In August 2006, after years of research showing Pluto was just another Kuiper Belt Object, the International Astronomical Union created the new category “dwarf planet” for Pluto and other similar objects.

November 24, 2015 ... Blue Origin achieves the first landing of a suborbital vertical launch vehicle. The New Shepard would launch and land five times, the last launch on October 5, 2016 to test the abort system for its crew capsule.

December 21, 2015 ... Not to be outdone, SpaceX returns to flight with the launch of its Falcon 9 from Pad 40 at the Cape. The booster returns to land at the former Pad 13, now called Landing Zone 1. It was the first landing in history of an orbital vertical launch vehicle.

March 2, 2016 ... U.S. astronaut Scott Kelly returns from 340 days in space at the ISS. He and Russian cosmonaut Mikhail Kornienko were part of the “One-Year Mission” to start developing a database for the effects of long-duration spaceflight on the human body.

May 28, 2016 ... The Bigelow Expandable Activity Module (BEAM) completes expansion at the ISS. The prototype is scheduled to be on station for two years.

January 14, 2017 ... SpaceX returns to flight at Vandenberg AFB with the launch and ocean landing of the Falcon 9 first stage. The company successfully deployed ten satellites for Iridium Communcations.

Posted by Stephen C. Smith at 7:42 PM No comments: