To be charitable, President Donald Trump is politically inexperienced.

His “drain the swamp” rhetoric during the 2016 presidential campaign appealed to those who were fed up with business as usual in Washington, DC, although such remarks suggested he had no concept of the art of governance.

Trump himself said little about NASA and space exploration during the campaign. In November 2015, Trump told a ten-year old New Hampshire boy that fixing potholes is more important to him. One can only wonder if that ten-year old's dreams of being an astronaut might have been dashed when the candidate suggested a career in road repair might be more vital to the country.

On March 21, Trump signed into law the National Aeronautics and Space Administration Transition Authorization Act of 2017.

During the signing ceremony, Trump robotically read a statement prepared for him, although he did make a few off-the-cuff remarks.

“We support jobs. It's about jobs, also.”

For once, Mr. Trump spoke the truth.

The Congressional representatives surrounding him at the ceremony were members of the House and Senate space committees largely responsible for the bill's contents.

Some of them were around when in 2010 Congress foisted upon NASA the Space Launch System.

Derided by some critics as the Senate Launch System, the SLS was created by Congress with no specific mission or use in mind. Its primary purpose was to protect Space Shuttle and Constellation program jobs.

During a September 14, 2011 media event, members of both houses lined up before the cameras to boast how they had saved jobs in their districts and states.

Leading that event was Senator Bill Nelson (D-FL), who provided a primer on the SLS design, calling it a “monster rocket.”

Since then, NASA has spent roughly $3-4 billion per year on SLS, the Orion crew capsule, and ground support systems. Some analysts believe SLS will be too expensive to operate, especially in competition with projected commercial options such as the SpaceX Falcon Heavy and the Blue Origin New Glenn.

During the signing ceremony, the President mispronounced the name for the Orion crew capsule, pronouncing it like a certain cookie with an “n” at the end.

Not NASA's next crew capsule.

Mr. Trump has spoken favorably about the commercial space sector, labelled NewSpace by some. While reading his prepared statement, the President added his own impromptu remarks.

This bill will make sure that NASA's most important and effective programs are sustained. It orders NASA to continue — and it does, it orders just that — to continue transitioning the activities to the commercial sector, where we have seen great progress. It's amazing what's going on. So many people and so many companies are so into exactly what NASA stands for. So, the commercial and the private sector will get to use these facilities, and I hope they're going to be paying us a lot of money.

If Mr. Trump thinks the purpose of the commercial space program is to generate revenue for NASA, he's mistaken.

The SpaceX lease of Kennedy Space Center's Pad 39A transfers over operation to the company to get government costs off the books. According to Florida Today, “NASA sought to lease 39A to keep it active and save more than $1 million annually in maintenance costs. As part of the lease, SpaceX takes over pad operation and maintenance costs.”

NASA's commercial cargo and crew programs paid milestone awards to competitors in exchange for achieving government-specified objectives. The idea was to grow an industry from which NASA and other government agencies could affordably acquire services.

Trump made no mention of his baseless claim uttered in Daytona Beach last August, when he told a local reporter that the U.S. space program was like “a third world nation.” It was just another fact-free insult that he's yet to retract.

After Trump signed the bill, the politicians surrounding him interjected various comments, possibly hoping one might stick.

Trump, of course, had nothing to do with all that. Culberson, in my opinion, was being a miserable suck up.

But particularly noteworthy was Trump's reply.

UPDATE March 25, 2017 — This week's video presidential address was on the history of NASA and Mr. Trump's signing of the 2017 NASA Act. Beyond that, no real substance.

Posted by Stephen C. Smith at 6:12 PM No comments:

Blue Origin announced March 7 that it has its first paying customer for a New Glenn launch.

Eutelsat will launch in the early 2020s, presumably from Cape Canaveral's Launch Complex 36.

Blue Origin also released a computer animation of a New Glenn launch and landing. The booster would return to a ship at sea.

On March 8, OneWeb announced a deal to launch five satellites on New Glenn, so now Blue has two customers.

This week's announcements come on the heels of SpaceX announcing February 27 a contract to fly two unspecified customers to the Moon on a cislunar round trip.

The Washington Post reported on March 2 that Bezos, who owns the paper as well as Blue Origin and Amazon.com, had submitted a seven-page proposal to NASA for delivering commercial cargo to the Moon's south pole for a lunar base.

Both visionary entrepreneurs have privileged access to the President. How much that matters, remains to be seen, but clearly the two rivals have captured media attention in the last few weeks.

Posted by Stephen C. Smith at 7:05 PM No comments:

These are photos taken with my cameraphone. You're welcome to use these images elsewhere, just credit SpaceKSC.com. Click an image to view it at a larger size.

Once in a Blue Moon 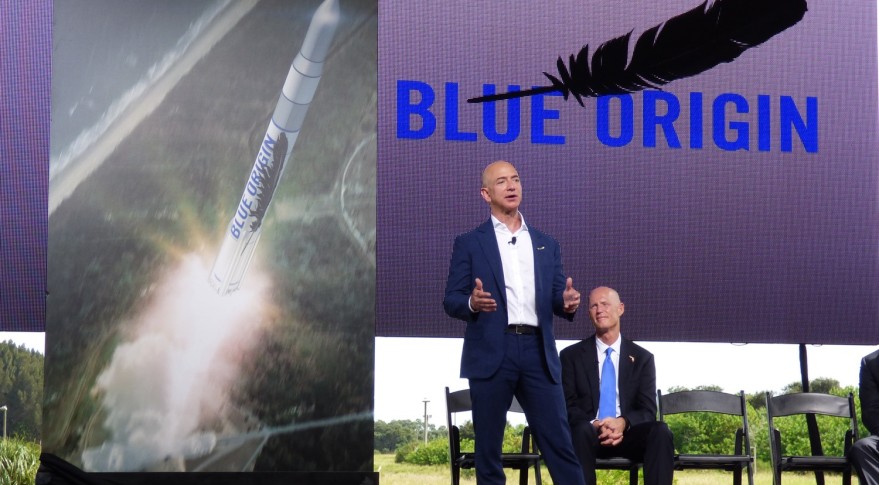 The Washington Post, owned by billionaire Jeff Bezos, published today an “exclusive look” at plans for Bezos-owned Blue Origin to develop technology for robotic deliveries to the Moon.

Bezos, ranked by Forbes magazine last October as the second richest person in the United States, is best known for founding Amazon.com, an electronic commerce and cloud computing company.

Now it appears Bezos wants to extend that concept to the Moon.

According to the article:

More than four decades after the last man walked on the lunar surface, several upstart space entrepreneurs are looking to capitalize on NASA's renewed interest in returning to the moon, offering a variety of proposals with the ultimate goal of establishing a lasting human presence there.

The commercial sector's interest comes as many anticipate support from the Trump administration, which is eager for a first-term triumph to rally the nation the way the Apollo flights did in the late 1960s and early 1970s.

The article reports that Bezos submitted a seven-page white paper to NASA and the Trump transition team “about the company's interest in developing a lunar spacecraft with a lander that would touch down near a crater at the south pole where there is water and nearly continuous sunlight for solar energy.”

Bezos wants NASA to invest in the enterprise, perhaps with a milestone model similar to the commercial cargo and crew programs. The article states the white paper calls for NASA to provide “incentives to the private sector to demonstrate a commercial lunar cargo delivery service.”

There's no point in delivering a package if no one is there to receive it (much less sign for it), so “Blue Moon” as it's called would need for another entity, public or private, to establish a lunar base first.

Bigelow Aerospace is suggested as a possible technology for deploying a base infrastructure. Its Bigelow Expandable Activity Module (BEAM) is currently being tested at the International Space Station.

Blue Origin, United Launch Alliance and SpaceX all are developing technologies for human spaceflight beyond Earth orbit. NASA's Space Launch System with its Orion capsule is also in development for such missions, but is considered by most observers to be far more expensive and inefficient than projected commercial alternatives.

Virgin Galactic announced today the formation of a company that separates their anticipated satellite launch services from commercial human spaceflight.

Effective today, our family of space companies numbers three. As with before, Virgin Galactic will be our commercial human spaceflight services provider and The Spaceship Company will continue to offer design, manufacturing and testing services to build vehicles for Virgin Galactic. And our small satellite LauncherOne team will become our newest company: Virgin Orbit.

In a separate press release, Virgin stated that the new company “will offer flexible, routine and low cost launch services for small satellites via the LauncherOne system.”

The press release states the system “is in advanced phase of hardware testing for every subsystem and major component of the vehicle-having already conducted long duration, full thrust firings of both of LauncherOne’s engines, cryogenic tank tests, and hardware-in-the-loop testing of the vehicle’s avionics.”

Virgin Orbit will be headquartered in Long Beach, California, but LauncherOne flights may take off from the Space Coast.

In April 2016, small satellite company OneWeb announced that LauncherOne may deploy some of their “microsats” from the former Space Shuttle runway at Kennedy Space Center.

On February 28, OneWeb and Intelsat announced a “conditional combination agreement” that could merge the two companies. Intelsat CEO Stephen Spengler stated in the press release:

We believe that combining Intelsat with OneWeb will create an industry leader unique in its ability to provide affordable broadband anywhere in the world. As an early equity investor in OneWeb, we recognized a network that was a complement to our next-generation Intelsat EpicNG fleet and a fit with our long-term strategy. By merging OneWeb’s LEO satellite constellation and innovative technology with our global scale, terrestrial infrastructure and GEO satellite network, we will create advanced solutions that address the need for ubiquitous broadband. The transaction, including SoftBank’s investment, will significantly strengthen Intelsat’s capital structure and accelerate our ability to unlock new applications, such as connected vehicles, as well as advanced services for our existing customers in the enterprise, wireless infrastructure, mobility, media and government sectors, while also reducing execution and other risks.

In October 2015, NASA awarded $4.7 million to Virgin Galactic to conduct a CubeSat demonstration flight by the end of 2018. Part of NASA's Venture Class Launch Services program, the awards to Virgin and two other companies were intended to “represent NASA's investment in the future of the commercial launch industry for SmallSats,” according to the NASA press release.

The viability of the smallsat market was demonstrated February 15 when the Indian Space Research Organization launched 104 satellites into orbit on its PSLV C 37. It was a record for the most satellites placed into orbit with one launch. Most of them were smallsats.

Eighty-eight of these were DoveSats from U.S.-based Planet. Formerly known as Planet Labs, the company called it the deployment of “the largest satellite constellation ever to reach orbit.” Planet specializes in the collection of data and imagery for its customers.

Virgin Orbit hopes to have the first test flight of LauncherOne by the end of 2017. Hopefully Mr. Coats will take note.

Posted by Stephen C. Smith at 9:18 AM No comments: