Three International Space Station crew members, two Russians and one American, landed April 10 on the frigid steppes of Kazakhstan. Their Soyuz capsule was a design evolved from the original that first launched with cosmonauts in 1971.

No Americans were supposed to have been on Russian craft by now.

Congress agreed to fund the commercial crew program, but over Fiscal Years 2011-2013 slashed the program's budget by 62%. Congress did so despite repeated warnings from NASA executives that the cuts would extend reliance on Russia until 2017 or longer.

The cuts were bipartisan. Many members of the House and Senate space authorization and appropriations subcommittees represent districts and states that have NASA space centers or legacy contractors. They objected to the Obama administration's proposal to cancel the Constellation program, which was to succeed the Space Shuttle. Constellation had run years behind schedule and was billions of dollars over budget. An August 2009 Government Accountability Office report concluded that Constellation lacked a “sound business case” and still faced many technical obstacles. An October 2009 independent committee review concluded that Constellation was unsustainable without a massive cash infusion. Its first crewed launch would be no earlier than 2017, probably later.

When Congress finally approved a NASA budget for Fiscal Year 2011, the legislators reluctantly agreed to cancel the Constellation boondoggle, but imposed on NASA a new program called Space Launch System. Dubbed the Senate Launch System by its critics, SLS had no missions or destinations, but it did require NASA to use Shuttle and Constellation contractors without competitive bid. Commercial crew was slighted to fund the SLS porkfest.

As predicted, commercial crew's schedule slipped. NASA has been forced to sign contracts with the Russian space agency Roscosmos extending reliance on Soyuz until commercial crew is ready. In 2018, Roscosmos will charge NASA $81 million per seat to ferry U.S. and allied astronauts to the space station. A September 2016 Office of the Inspector General report concluded that NASA hopes to have its first operational commercial crew flight by late 2018, but challenges remain.

Rarely mentioned or contemplated by critics is the other side of the equation.

For years, the Russians have known that it's only a matter of time before their primary customers leave to launch once again from American soil.

Despite the country's autocratic leadership, occasionally Roscosmos executives and cosmonauts have publicly criticized their space program, noting that the NewSpace commercial movement in the United States will produce innovative new systems that will be far more modern and less costly than the Russian competition.

Senior cosmonaut Gennady Padalka commanded the ISS in May 2012 when the SpaceX Dragon made its first automated cargo delivery. After he returned to Russia, Padalka criticized his nation's program.

At the traditional Russian post-landing press conference on Sept. 21, cosmonaut Gennady Padalka complained about the “spartan” conditions aboard the Russian side of the station, especially as compared with the American side. The conditions were cold, noisy, overstuffed with equipment, and cramped — each Russian had about one-seventh the living space that the American astronauts had. “All of this gives serious inconvenience in the operation of the Russian segment,” he said ... The equipment, he continued, was reliable and safe but was decades out of date. “Nothing has been done in the 20 years since the foundation of the new Russia,” he complained. The Russian space technology is technologically bankrupt and “morally exhausted.” It was, he told reporters, “frozen in the last century.” He contrasted those conditions with the spaciousness and modernity of the American modules, and praised the advanced technology he saw there: the robotics experiment (“As always, still under study in Russia”) and SpaceX's commercial spacecraft docking, for example.

A week later, Roscosmos General Director Vladimir Popovkin said in a public lecture, “Unless we undertake extreme measures, the sector will be uncompetitive within three-four years.” Popovkin predicted that by 2015, “Western equipment will be priced 33 to 50 percent lower.”

In October 2013, Popovkin was sacked and replaced by Oleg Ostapenko. Popovkin died in June 2014, from an undisclosed illness at age 57.

Ostapenko was sacked in January 2015, as Deputy Prime Minister Dmitri Rogozin directed that Russian space activities be brought under tighter state control, the opposite of what the U.S. is doing. Ostapenko was replaced by Igor Komarov, who's managed to remain in the Director General position to this day. Although he began his education as an engineer, Komarov's career largely has been in banking and finance.

Rogozin was one of seven Russian government officials designated by the Obama administration in a March 2014 executive order which imposed economic sanctions on “individuals who wield influence in the Russian government and those responsible for the deteriorating situation in Ukraine.”

The sanctions generally have been effective in depressing the Russian economy. At the time in March 2014 when the sanctions were imposed, the ratio of Russian rubles to U.S. dollars was about 0.027. Today it's about 0.018.

As the Soviet Union collapsed in 1991, United States government officials worried that Soviet aerospace engineers might flee to nations hostile to American interests. Under Presidents George H.W. Bush and Bill Clinton, NASA slowly intertwined itself with the Russian space program. By one vote in 1993, the House of Representatives nearly cancelled the Space Station Freedom project. The U.S. invited Russia to join Europe, Japan and Canada in building a new International Space Station, based on Freedom's earlier designs but now with Russian segments. NASA flew Space Shuttle missions to the Soviet-era Mir space station, to develop experience in assembling and servicing an orbital platform. Russian cosmonauts flew to Mir on the Shuttle, and U.S. astronauts flew to Mir on Soyuz spacecraft.

By the time of the Columbia accident on February 1, 2003, NASA, Roscosmos and the other ISS partners had learned to collaborate as one global space agency. No one questioned American reliance on Soyuz for crew rotations after Columbia. On January 14, 2004, President George W. Bush announced that the Shuttle would fly again, but only to complete ISS assembly to honor the nation's commitment to its spacefaring partners, and then the Shuttle would retire. Crew rotations would continue to rely on Roscosmos, even during the gap between Shuttle and whatever transport system came next.

In early 2014, Russian President Putin ordered troops to invade Crimea, today a part of the independent nation Ukraine but in times past a part of Russia. The U.S. and other nations imposed sanctions upon the Russian economy and Putin cronies, including Deputy Prime Minister Rogozin.

Rogozin and Putin-controlled Russian media continue to spin one story for internal consumption, while another is told to the outside world. Russia Today reported on April 5 that Russia should plan for withdrawing from the ISS partnership in 2024, seeking a new partnership with China or India. A similar report appeared in Pravda. But at the same time, Director General Komarov was in Colorado Springs at the Space Symposium telling reporters that Roscosmos is willing to extend ISS to 2028. 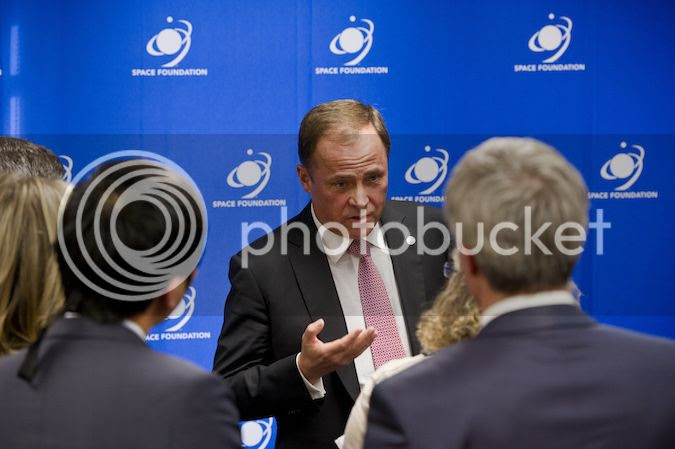 The Russian space program continues to deteriorate. In June 2016, Roscosmos delayed a Soyuz launch, fearing that the spacecraft might roll uncontrollably as it approached ISS. In December 2016, a Progress cargo flight to ISS was lost after launch as it broke up over Siberia. By one estimate, it was the fifteenth failure of a Russian rocket in six years.

The Moscow Times reported on March 30 that “An investigation into quality control issues in the Russian space industry has discovered that nearly every engine currently stockpiled for use in Proton rockets is defective.” The Moscow Times is an independent English-language publication based in Moscow.

And to add a little intrigue, a former Roscosmos executive director was found murdered March 18. Vladimir Yevdokimov was stabbed to death in prison while awaiting trial on fraud charges. Yevdokimov had been in charge of quality control at Roscosmos.

In March 2016, the Russian government approved a ten-year budget for its space program. The total dollar amount was $20 billion, a bit more than what NASA spends in one fiscal year. It was nearly two-thirds less than the $56 billion ten-year budget proposal draft circulated in the spring of 2014, before the sanctions took effect.

On March 30, SpaceX launched and landed its first previously flown Falcon 9 rocket. State-controlled Sputnik News reported the next day that a Kremlin spokesman claimed Roscosmos is working on “no less advanced and breakthrough developments” to compete with SpaceX. Another Sputnik News article claimed that the Space Shuttle program ended because it failed to achieve its goal of reusable affordability. The article quoted a Russian military expert as saying, “Ultimately, the United States was left without its own spacecraft and delivery of their astronauts to the International Space Station is being provided by Russia.” The article claimed that the SpaceX design is flawed, and that a Russia-China partnership might develop a more competitive reusable system.

No mention has been made of Blue Origin, which is also developing reusable rocket technology. Blue intends to fly its New Glenn orbital rockets from Cape Canaveral's Launch Complex 36 by the end of this decade.

Some emerging NewSpace launch companies are thinking small. Vector Space Systems, Rocket Lab and others are developing small rockets to launch small payloads into orbit. The Vector-R is designed to deliver 60 kilograms (130 pounds) to low Earth orbit. The company claims Vector-R is designed for up to 100 launches. It can be launched from a mobile platform, and will be retrieved by parachute.

Historians may look back at the American NewSpace movement as the defining technological advance of our era. It may compare to the 1920s, when the U.S. Post Office contracted with airplane owners to deliver mail, and eventually offered a subsidy to carry passengers. That program led to the commercial aviation industry and the airport hub system we have today.

The United States has a robust economy. Russia does not. Venture capitalists are discovering NewSpace. A February 2016 Tauri Group report found that “Venture capital firms invested $1.8 billion in commercial space startups in 2015, nearly doubling the amount of venture cash invested in the industry in all of the previous 15 years combined,” according to Fortune magazine.

CNBC reported on April 6 that Goldman Sachs is telling its clients to invest in NewSpace.

A new space age is emerging, and the so-called space economy will become a multitrillion-dollar industry within the next two decades, Goldman Sachs is telling its clients.

More than 50 venture capital firms invested in space in 2015, driving more VC dollars into the sector in that year alone than in the prior 15 years combined, analyst Noah Poponak wrote in a Tuesday note to investors. Those firms included SoftBank, Fidelity, Bessemer and the VC arm of Alphabet's Google, among others.

With the exception of the Space Launch System, the United States is embracing private sector investment, innovation and competition. Russia is retreating into a Soviet-era model of state control, corruption and cronyism.

It didn't work the last time. It won't work this time either.

In the early 1990s, American policy analysts were concerned that Soviet aerospace technologists might flee into the embracing arms of hostile nations.

The collapse of the modern Russian aerospace industry might result in the same “brain drain,” but this time no one particularly seems concerned.

Vladimir Putin and his cronies may be set for life with their accumulated wealth. But the Russian space program is on life support.