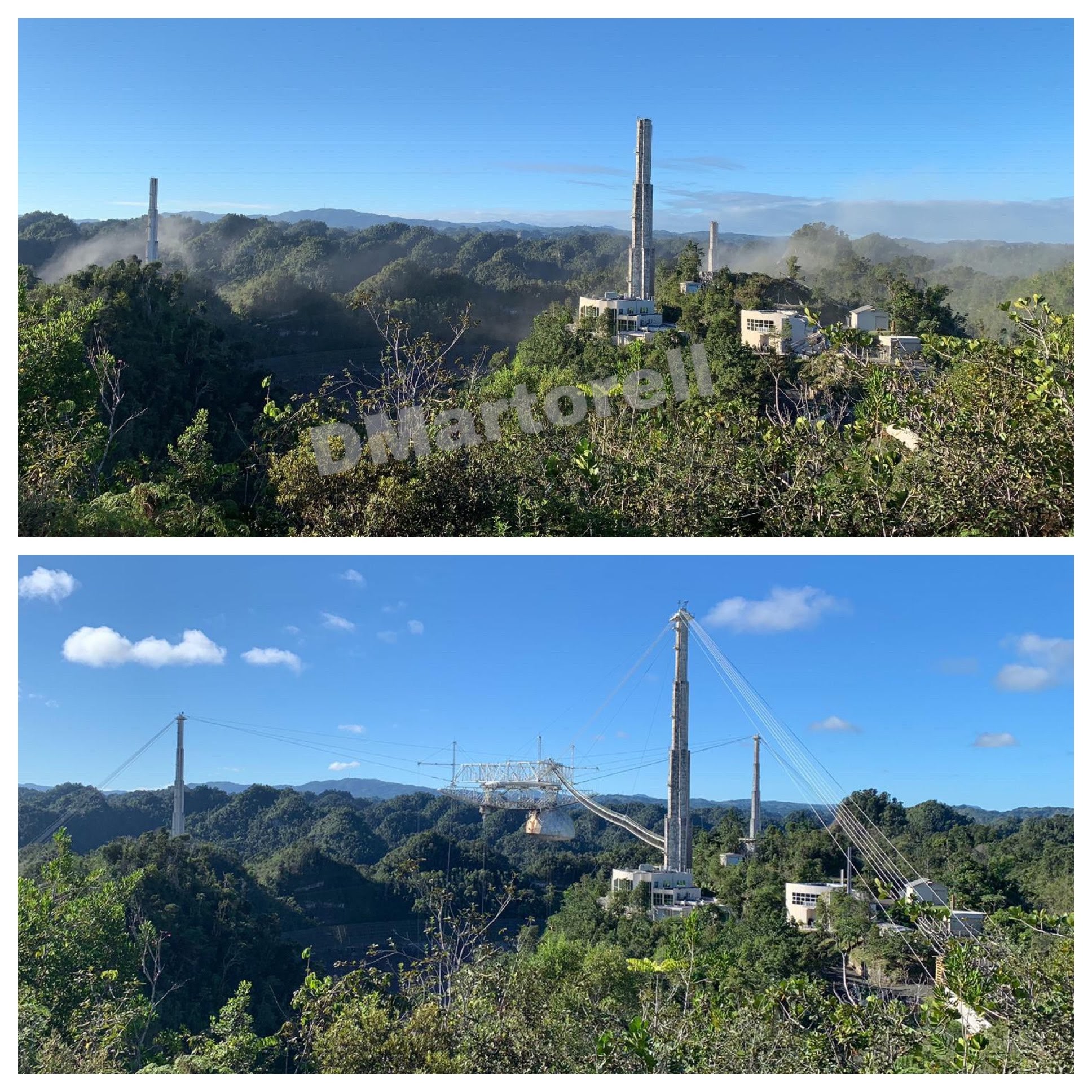 The top image shows the Arecibo observatory site this morning after the collapse. The lower image is prior. Image source: @DeborahTiempo on Twitter.


Astronomy lost one of its most historic telescopes this morning when the Arecibo Observatory steerable receiver and catwalk collapsed into its already damaged reflector dish.

The National Science Foundation, which owns the observatory, posted on Twitter:

The instrument platform of the 305m telescope at Arecibo Observatory in Puerto Rico fell overnight. No injuries were reported. NSF is working with stakeholders to assess the situation. Our top priority is maintaining safety. NSF will release more details when they are confirmed.

NSF is saddened by this development. As we move forward, we will be looking for ways to assist the scientific community and maintain our strong relationship with the people of Puerto Rico.

According to the National Astronomy and Ionosphere Center (NAIC) web site:

The NAIC web site offers a detailed description of the telescope's design. It consisted of a 1,000-foot diameter reflector dish suspended by a network of steel cables above a natural mountain valley bowl. Suspended 450 feet above the reflector was a 900-ton platform hung in midair on eighteen cables strung from three reinforced concrete towers

These cables would one day lead to its doom.

Arecibo was built in the infant years of radio astronomy. Until the mid-20th Century, most astronomy focused on optical astronomy — what we can see with our own eyes, aided by a telescope. Astronomers began to realize that the universe might be visible in other wavelengths of light.

A few astronomers and others interested in the search for extraterrestrial life reasoned that, just as radio waves are used here on Earth for communication, so might alien civilizations use radio waves to communicate with each other — and perhaps even us.

In 1961, Drake hosted the first Search for Extraterrestrial Intelligence (SETI) conference at Green Bank. Among the attendees was a young astronomer named Carl Sagan. From that conference emerged the Drake Equation, a formula attempting to estimate the number of transmitting extraterrestrial societies in our galaxy.
Carl Sagan's 1980 “Cosmos” visits the Arecibo Observatory to discuss the Drake Equation and the search for extraterrestrial intelligence. Video source: Bogdan Iancu YouTube channel.

Drake visited Arecibo in 1963 and met with Gordon. In his 1992 book, Is Anyone Out There? The Scientific Search for Extraterrestrial Intelligence, Drake wrote:

I could see its potential to become the most sensitive instrument ever applied to radio astronomy research. All you had to do was figure out a way to stabilize the platform so it didn't sway in the wind or rise and fall with the temperature changes, and then you could have access to all wavelengths. Granted, that was a tall order — an engineering brainteaser that would cost millions — but I suspected it could be done. And if and when that happened, the instrument would be uniquely suited to search for life in space.

Arecibo's unique capabilities led to the discovery of the first binary pulsar in 1974 by Russell A. Hulse and Joseph H. Taylor, Jr, of Princeton University, for which they received the 1993 Nobel Prize for Physics. According to a Nobel press release:

Here a new, revolutionary “space laboratory” has been obtained for testing Einstein’s general theory of relativity and alternative theories of gravity. So far, Einstein’s theory has passed the tests with flying colours.

Arecibo was subjected to Nature's forces over the decades. A January 2014 earthquake damaged one of the main suspension cables. In September 2017, Hurricane Maria damaged the observatory, causing an antenna to snap from the overhead platform and puncture the dish, along with the loss of various equipment. Puerto Rico experienced an earthquake swarm in late 2019 and early 2020. 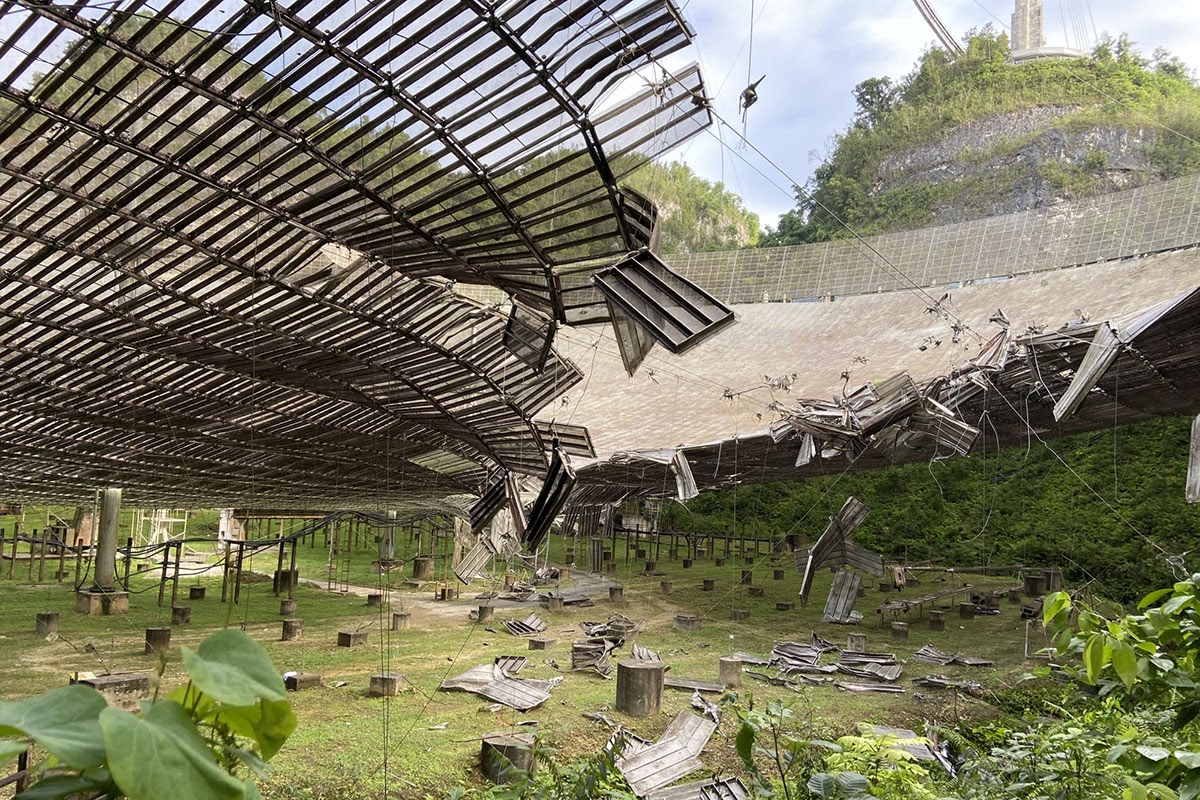 The failure of a support cable on August 10, 2020 damaged the reflector dish. Image source: University of Central Florida.


A second cable failed on November 7, and on November 19 the National Science Foundation announced that the telescope would be decommissioned. 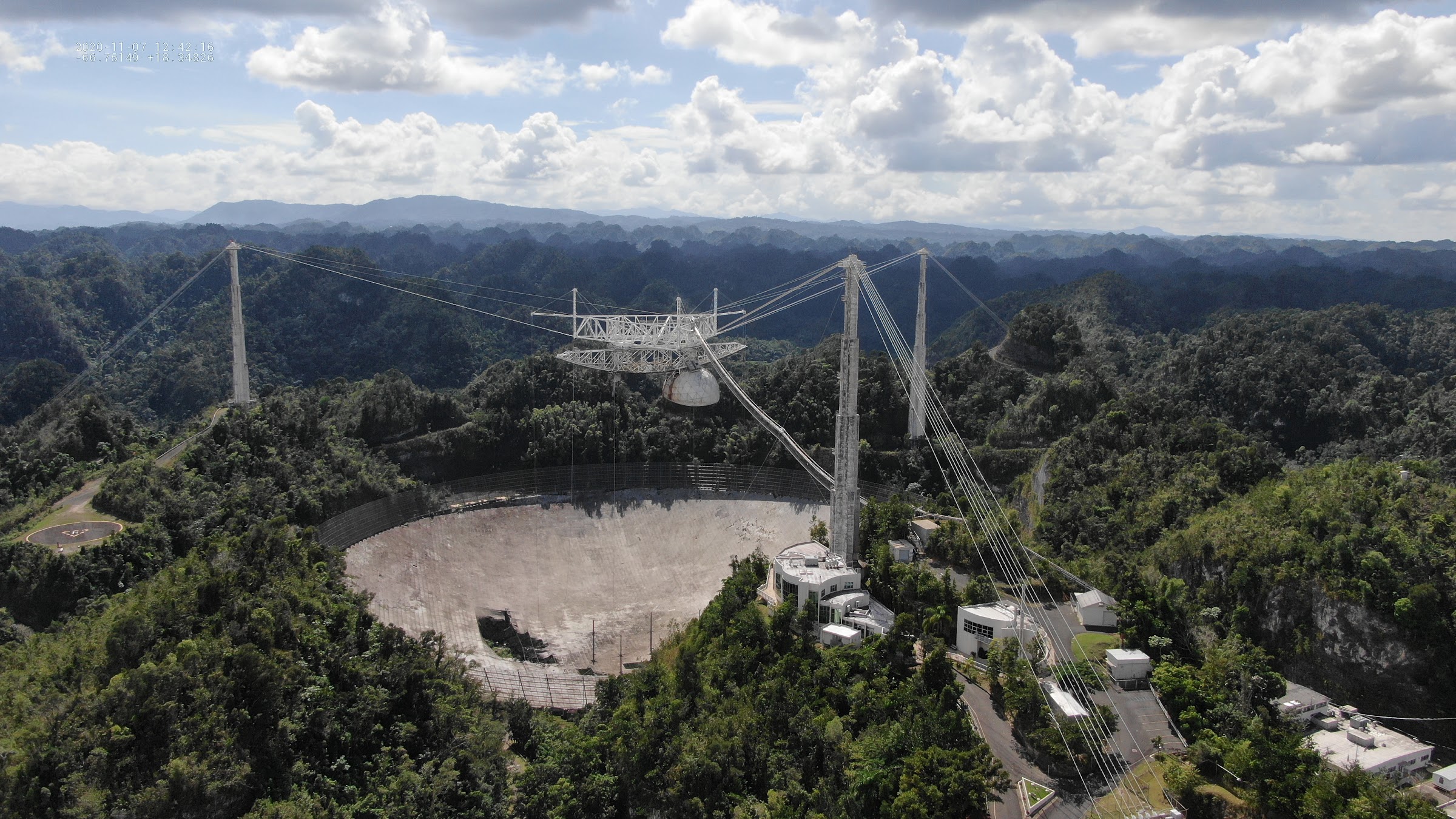 The telescope as it appeared in November 2020. Image source: University of Central Florida.


Following a review of engineering assessments that found damage to the Arecibo Observatory cannot be stabilized without risk to construction workers and staff at the facility, the U.S. National Science Foundation will begin plans to decommission the 305-meter telescope, which for 57 years has served as a world-class resource for radio astronomy, planetary, solar system and geospace research.

The decision comes after NSF evaluated multiple assessments by independent engineering companies that found the telescope structure is in danger of a catastrophic failure and its cables may no longer be capable of carrying the loads they were designed to support. Furthermore, several assessments stated that any attempts at repairs could put workers in potentially life-threatening danger. Even in the event of repairs going forward, engineers found that the structure would likely present long-term stability issues.

The University of Central Florida, which manages the telescope for the National Science Foundation, issued a press release this afternoon with first images of the damage. 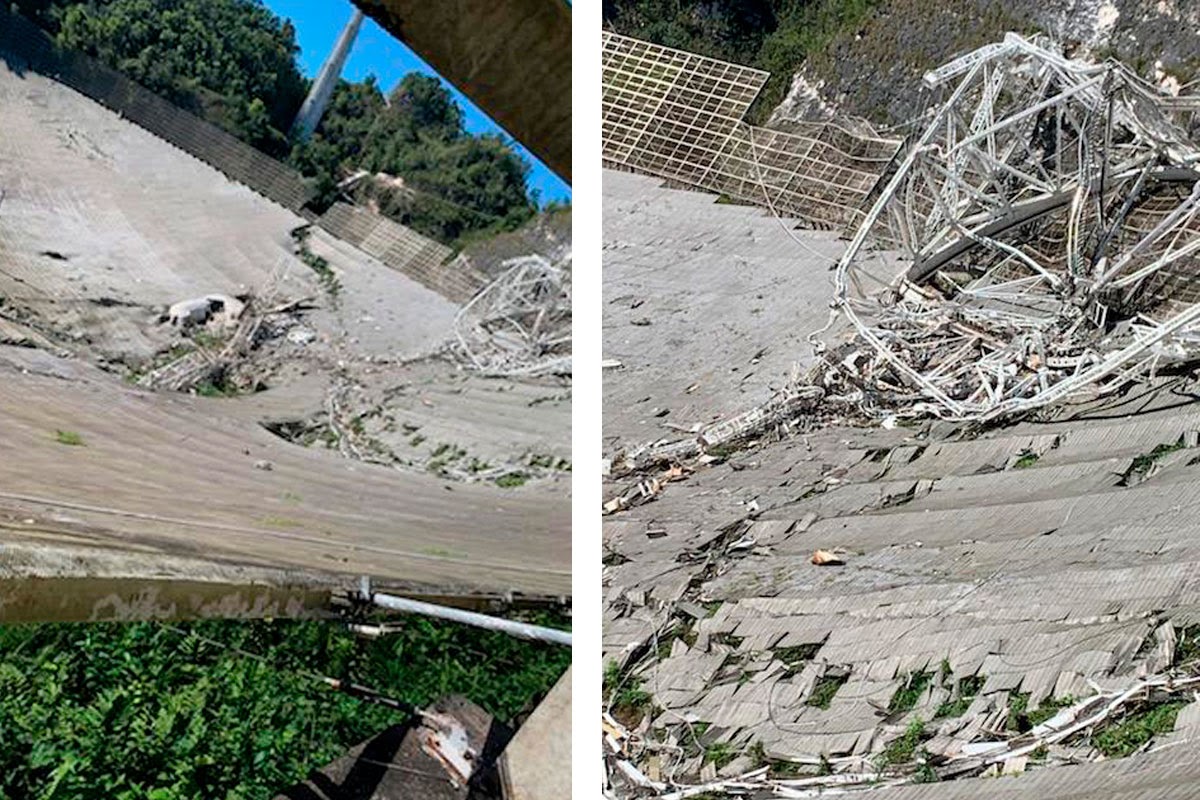 
The investigation into the exact details of the platform’s fall is still ongoing. Initial findings indicate that the top section of all three of the 305-meter telescope’s support towers broke off and landed outside the area of the dish. As the 900-ton instrument platform fell, the telescope’s support cables also dropped. The Gregorian Dome is in the dish and the platform is lying on the edge of another side of the dish.

By one count, today over one hundred radio telescopes operate around the world. Space News reported today that Arecibo was becoming techonologically obsolete, and early discussions were already under way between NSF and the U.S. Space Force for collaboration on new planetary radar systems.

In 1974, Arecibo transmitted a radio message in 1974 towards the globular star cluster M13. It was a simple pictorial message depicting the telescope, our solar system, DNA, a stick figure of a human, and some of the biochemicals of earthly life.

The message will take 21,000 years to reach M13, unless it's intercepted on the way. If anyone ever does receive it, the response is unlikely to be received for many thousands of years.

But if first contact ever does happen, it may be due to the telescope that fell today to the ravages of nature and time.

Posted by Stephen C. Smith at 3:07 PM No comments: