Imagine the consequences if politicians, and not engineers, designed rockets.

On January 10, 1962, NASA engineers at Marshall Space Flight Center in Huntsville, Alabama announced that they would evolve their Saturn rocket into an advanced version with five first-stage engines and 7.5 million pounds of thrust. This advanced Saturn would be capable of sending American astronauts to land on the Moon.

Engineers made the decision, at a NASA center dedicated to rocket design, free of political influence.

The first Saturn V launch was a little less than five years later, on November 9, 1967.

Now let's imagine that politicians took it upon themselves to design a rocket, not for a specific mission or destination, but to protect a workforce.

On September 14, 2011, then-U.S. Senator Bill Nelson (D-FL) and now-retired U.S. Senator Kay Bailey Hutchison (R-TX) led a bipartisan media event on the ground floor of the Senate Dirksen Building in Washington, DC to unveil the design for a new rocket they were foisting upon NASA, to be called the Space Launch System.

The basic design of SLS was dictated by Congress in the 2010 NASA authorization act.

The legislation mandated that NASA must base SLS on Space Shuttle technology, and use existing Space Shuttle and Project Constellation contractors without competitive bid. The law discouraged innovation, telling NASA to “minimize the modification and development of ground infrastructure and maximize the utilization of existing software, vehicle, and mission operations processes.”

The bill also directed that SLS have “operational capability” by no later than December 31, 2016.

Just who actually came up with the SLS design has never been clear. Members of Congress dominated the event a decade ago. NASA Administrator Charlie Bolden was relegated to a minor role, speaking for five minutes, while the politicians congratulated themselves for all the jobs they were going to create.

I've written many times about this event, most notably a September 2012 blog article titled “The Monster Rocket.” It was a phrase Nelson has used many times to describe SLS, the phallic symbolism lost upon him.

In a boast that has proven wildly wrong, Nelson said that day: 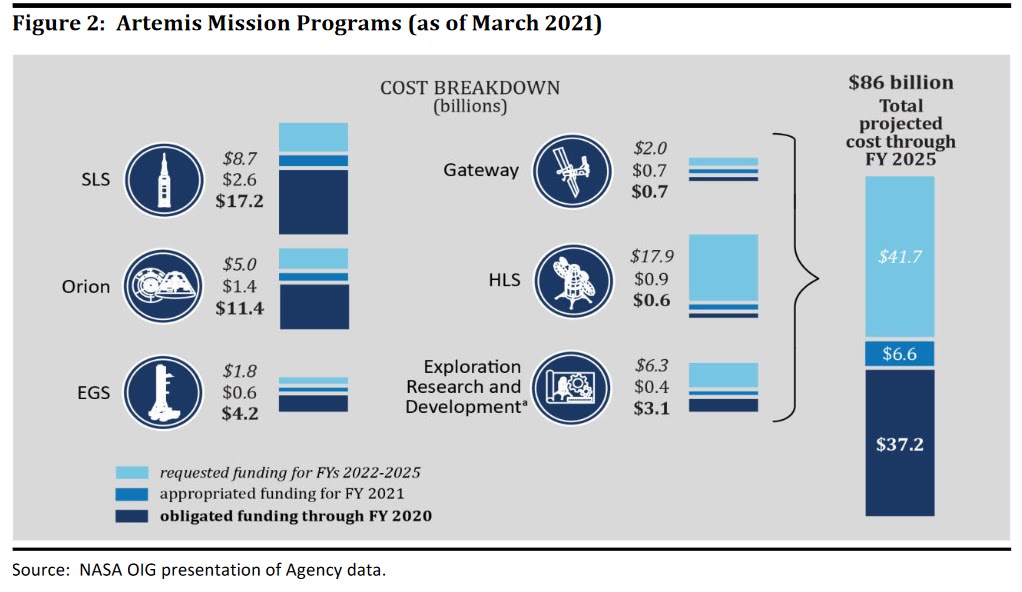 An Artemis cost graphic issued in March 2021 by the NASA Office of the Inspector General. Click the image to view at a larger size. Image source: NASA OIG.

The NASA Office of the Inspector General issued a report in March 2021 which showed that to date NASA had spent $17.2 billion on the “monster rocket,” with another $2.6 billion expected in the current fiscal year. That's $19.8 billion, or about double what Nelson said it would cost.

But none of that mattered ten years ago. What did matter to the assembled politicians was that they were able to boast about all the jobs they were creating in their districts and states.

The Congress is assuming, in the face of numerous studies indicating otherwise, that the lowest-cost approach for the future is to continue the high-cost approach in which we've been engaged for the past half century. Note also that there are many heavy-lift concepts that do not employ solid rocket motors, and that the only thing for which they are “critical” is the maintenance of a jobs base in the state of Utah.

The number of projected jobs made the front page of next day's Florida Today, the newspaper for Florida's Space Coast and those who worked at Kennedy Space Center.

The paper estimated that “roughly 2,000 KSC jobs” would be created by the proposed SLS. The first uncrewed test flight would be in 2017, and the first “piloted” mission would be in 2021.

The front page of the September 15, 2011 Florida Today. Click the image to view at a larger size. Image source: Newspapers.com.

If you look at your calendar, you'll notice that we are indeed in 2021. Not only has no one piloted the Orion spacecraft atop SLS, but SLS has yet to fly at all.

Although NASA still clings to the notion that the first test flight, dubbed Artemis I, will launch by the end of this year, the realists think it'll be sometime in Spring 2022 — assuming there are no more delays. Artemis II, the first flight with crew, is projected for some time around 2023.

No one at the SLS unveiling could have foreseen that, a decade later, Nelson would be the one running NASA.

No one could have foreseen that any politician would be in charge of NASA. That changed in September 2017 when President Donald Trump nominated House representative Jim Bridenstine (R-OK) for NASA Administrator.

Florida's two U.S. Senators criticized the nomination, not just Nelson but also Republican Marco Rubio. In a written statement, Nelson said, "The head of NASA ought to be a space professional, not a politician." Rubio felt the nomination might be held up due to partisanship.

To open Bridenstine's nomination hearing, Nelson said, "The NASA administrator should be a consummate space professional who is technically and scientifically competent and is a skilled executive."

Bridenstine left NASA on January 2021, the date that Joe Biden became President. I'd argue the consensus is that Bridenstine proved the skeptics, including Nelson, wrong.

Jeffrey Kluger of Time wrote that Bridenstine “became something NASA always needs: a leader with both a vision to sell and the ability to sell it.”

Perhaps his signature achievement will be viewed by historians as his packaging disparate NASA programs into one marketable concept, called Project Artemis.

Artemis gave SLS and Orion a specific near-future mission — to land the next man and the first woman on the Moon by 2024.

President Barack Obama, in an April 15, 2010 speech at Kennedy Space Center, set NASA's next goal for human space flight as sending people to Mars by the end of the 2030s.

The Obama administration didn't ignore the Moon. Our lone natural satellite would be left for the private sector, through a program called NextSTEP. The first NextSTEP request for proposals was issued by NASA in October 2014.

NASA intends to engage partners to help develop and build a set of sustainable, evolvable, multi-use space capabilities that will enable human pioneers to go to deep space destinations. Developing capabilities in three key areas — advanced propulsion, habitation, and small satellites deployed from the Space Launch System — is critical to enabling the next step for human spaceflight. This work will use the proving ground of space around the moon to develop technologies and advance knowledge to expand human exploration into the solar system.

Congress never warmed to the idea of an Apollo-style and Apollo-budget program to send humans to Mars, perhaps because the return to their districts and states would not be immediate. SLS protected jobs, and that was good enough.

Project Artemis packaged SLS pork with NextSTEP, and added a lunar space station called Gateway that used a solar electric power and propulsion element the Obama administration had originally intended to develop as part of its Asteroid Redirect Mission. Never popular with Congress, ARM was cancelled by the Trump administration in December 2017, but the power and propulsion element eventually became part of Gateway.

The Obama administration used a loophole in NASA's founding charter to sign Space Act Agreements (SAAs) with the private sector, circumventing the expensive pork-laden “cost plus” contracts favored by Congress that guarantee profits for legacy contractors, such as those no-bid SLS contracts. SAA contractors win a competitive bid for a fixed price, and are paid only after delivery of the service.

Other than SLS and the Orion crew spacecraft, much of Project Artemis will be performed by SAA contractors or NASA's international spacefaring partners. The Trump administration and Bridenstine embraced SAAs, now reluctantly accepted by Congress, as a way to accelerate the Moon program.

The 2009 Augustine Committee report issued in October 2009 discussed the need for a “super heavy-lift launch vehicle” for deep space missions, but in a context of the absence of in-space refueling. The committee wrote, “... a prudent approach is to develop a heavy-lift launch system with sufficient capabilities for early missions, which would later be enhanced by in-space refueling when it becomes available.”

Congress for years has generally been resistant to the notion of propellant depots in space, perhaps because such technology could obviate the need for a big expensive no-bid government rocket. But in October 2020, Bridenstine announced fourteen “Tipping Point” awards to American companies to demonstrate various in-space “cryogenic fluid management technologies.”

When Congress mandated SLS in 2010, no “super heavy” launch vehicles were on the private sector horizon. Why? The government hadn't paid them to build one.

SpaceX had just launched the first Falcon 9 in June 2010. The Falcon Heavy concept was unveiled in April 2011. With his typical over-optimism, SpaceX founder Elon Musk predicted the first test flight would be in 2013. It was actually 2018.

In all fairness, when Nelson unveiled the SLS design ten years ago today, no commercial super-heavy option was credible. But neither was there any deep-space mission that required one. The priority for human space flight was completion and operation of the International Space Station.

Had Congress supported an SAA-style competition similar to NASA's ISS commercial cargo and crew programs, it's likely that a super-heavy vehicle would have been developed by now for less than what SLS has cost the taxpayer, and be operational.

An early test has been to shepherd NASA's delicate relationship with Roscosmos, at a time of frosty relations between the United States and Russia.

The Russians have sent mixed messages about maintaining their ISS partnership after 2024. Although the ISS's life space is estimated to be at least through 2030, Russia recently reported “superficial fissures” in the Zarya module that “will begin to spread over time.”

In the United States, private companies already have begun to develop commercial space habitats, some of which may become part of Gateway, or fly in low Earth orbit, as a complement and one day a replacement for ISS. SpaceX and Axiom plan crewed private missions to ISS within the next year.

Nelson may also have to address the maturation of the Chinese space program. Nelson believes that NASA is “in a space race with China” and notes that their program is intertwined with their military, unlike NASA in the United States.

But because of what he said ten years ago, Nelson's legacy will forever be linked to his midwifery of Space Launch System. Success or failure, SLS will be remembered as Bill Nelson's “monster rocket.”

For his legacy to be more than that, to be remembered as another Bridenstine, Nelson will have to place “NewSpace” ahead of OldSpace, which means at some point ending SLS.

SpaceX is developing and testing its Starship technology at their Starbase facility near Boca Chica, Texas. When operational, it's projected to deliver 100 metric tons to low Earth orbit, more than the SLS Block 1 at 70 metric tons.

More powerful versions of SLS are on the drawing boards, but at what expense?

That may be the true test of Nelson's NASA legacy. Will he support spending more billions on SLS Block 1B and Block 2, or will he save that money by acquiring more affordable launch services from SpaceX or another vendor?

Who will design American launch vehicles — engineers or politicians?

If only Nixon could go to China, then perhaps only Nelson can end SLS.