Say what you will about the year of our Lord 2021, but future aerospace historians will remember this year as when commercial space travel finally became viable.

On July 11, billionaire Sir Richard Branson and invited passengers reached an altitude of about 53 miles on their Virgin Galactic suborbital flight.

After he landed, Branson said:

We're here to make space more accessible to all. We want to turn the next generation of dreamers into the astronauts of today and tomorrow. We've all us on this stage have had the most extraordinary experience, and we'd love it if a number of you can have it, too. If you ever had a dream, now is the time to make it come true. I'd like to end by saying welcome to the dawn of a new space age.

After he landed, Bezos said:

On September 15, SpaceX launched Inspiration4, the first all-American orbital commercial mission, from Kennedy Space Center's Pad 39A. Billionaire Jared Isaacman purchased a crew Dragon flight atop a Falcon 9 rocket, a three-day mission that reached an altitude of about 364 miles, or about 100 miles higher than the International Space Station's orbit. Isaacman selected three passengers from all walks of life to join him.

With all three flights, some of the media focus was on the “billionaire” status of those financing the flights, as if it's immoral for rich people to pay for non-rich people to go into space.

Some complain that the money could have been better spent on the impoverished, the homeless, the afflicted.

But guess what?! We're a rich nation. We're capable of doing more than one thing at a time.

According to the Federal Reserve, the net worth of U.S. households at the end of 2021's second quarter was $141.7 trillion.

If you want to solve poverty, homelessless, and diseases, we're awash in money to do it. You need to convince your elected officials to do something about these problems.

The Inspiration4 mission's goal was to raise $200 million for St. Jude's Hospital. SpaceX founder Elon Musk donated $50 million after the flight to put the effort over the top.

Roscosmos will launch a film director and woman actor to the International Space Station in early October. The Russians launched several space tourists in the early 2000s, starting with Dennis Tito for $20 million in 2001.

SpaceX and Axiom Space are targeting February 21 for the Ax-1 mission. Three affluent investors will join former NASA Space Shuttle astronaut Michael Lopez-Alegria for an eight-day mission to the ISS.

While some spin these historic firsts as a criticism of the ills of capitalism, I think the larger point is being missed.

The technology has advanced.

No longer does NASA control who goes into space. You don't have to be a government employee to go into space. A government agency (the Federal Aviation Administration) regulates the flight, but doesn't decide if you're worthy of it.

Inspiration4 was the first orbital flight with no NASA involvement, other than being the landlord who leased SpaceX the launch pad.

SpaceX trained the crew, launched them, and landed them safely.

SpaceX did everything that NASA has done for the last sixty years.

Within the next decade, we may see other American companies achieve the same capability.

NASA is finally returning to its original purpose when it was founded in 1958.

The National Aeronautics and Space Administration began on October 1, 1958. It was created as a political response to the panic following the early Soviet Sputnik flights, when the mistaken public perception was that American space technology was inferior to the Soviet Union.

The political solution — a bipartisan agreement between the Republican Eisenhower administration and Democratic Senate Majority Leader Lyndon Johnson — was to merge the old National Advisory Committee for Aeronautics (NACA) with existing military space research programs that could be spun off into a civilian agency. NASA took over military research programs such as the X-15 and what eventually became Project Mercury.

These were research programs. They were not intended to be operational programs providing routine access to space, much less to compete with a commercial space industry that didn't exist at the time.

The NACA was created in 1915 because of the public perception that American aviation technology lagged behind Europe.


A 2015 NASA documentary on the 100th anniversary of the NASA. Video source: NASA YouTube channel.

Aviation engineers joined the NACA to force-feed technology into the American aviation industry. Because computers didn't exist, the NACA built wind tunnels at the Langley Memorial Aeronautical Laboratory in Virginia to test their ideas.

Many of the airplane technologies we take for granted today came out of the NACA, such as engine cowlings, the shape of an airplane fuselage, and the angles of airplane wings.

But the government didn't run the airlines, as NASA has controlled space access for the last sixty years. NACA made their findings available to the private sector, so America could compete on a global stage.

The events of 2021 are evocative of the earliest years of American commercial passenger aviation.

Just as the affluent are paying now to fly with SpaceX, Blue Origin, or Virgin Galactic, so did the affluent pay airplane companies to fly them on the first short hops from one city to another.

A January 1, 1920 article in the Chicago Tribune declared that “air transportation is now practicable” but noted that “the cost of travel is high.” The author estimated the cost of a flight from London to Paris at about $100, which works out to about $1,300 today. A cursory Google search shows that the cost of a London-to-Paris flight today is roughly $100 round-trip, but you can find cheaper.

Five years later, in March 1925, an author for the North American News Alliance wrote, “the aeroplane has served no better use than killing men; it is still almost a failure as a commercial vehicle.”

The governments of Europe are encouraging civilian flying as a subsidiary to their military plans. Were it not for that, Europe would probably see from one year's end to the other only a little stunt-flying at country fairs.

Is that any different from now, one hundred years later, when Virgin Galactic and Blue Origin are just now launching suborbital hops?

The SpaceX Inspiration 4 mission, and next February's Ax-1 mission, are viable because NASA selected SpaceX, Falcon 9 and Dragon for commercial cargo, which allowed SpaceX to mature those technologies to fly government employees.

Despite the author's skepticism, only two years later was Charles Lindbergh's nonstop transatlantic flight from New York City to Paris. That flight was to win a $25,000 prize (about $360,000 in today's dollars) offered in 1919 by French-American hotel owner Raymond Orteig. Six men died over the years before Lindbergh finally won.

When he returned a month later to New York City, Lindbergh in a speech said, “Our greatest need is for airports close to the great cities.” He foresaw the next great technological leap as “multimotored planes” and urged the nation to look forward to a time when passenger service would be “better than that of any European country.”

Three years later, multimotored translantic flights were about to become a reality.

In February 1930, American aviation pioneer William Stout was quoted as saying that $750 million had been spent in the last two years on commercial aviation technology. That's about $11.4 billion in today's dollars! One can imagine critics saying that the money would be better spent on helping those suffering during the Great Depression.

“Nothing has yet come out of it” but, “When it comes, then will come the revolution of aeronautics.”

German airplane designer Claude Dornier had completed the Dornier Do X, a giant flying boat with six propellers and twelve engines, capable of carrying 169 passengers. In August 1931, the Dornier Do X flew from west Africa to Brazil, then north until it finally arrived in New York City, completing the first transatlantic flight of a large passenger plane.

Although the Dornier Do X was too inefficient to fly as a commercial enterprise, it proved the technology, and established the precedent. 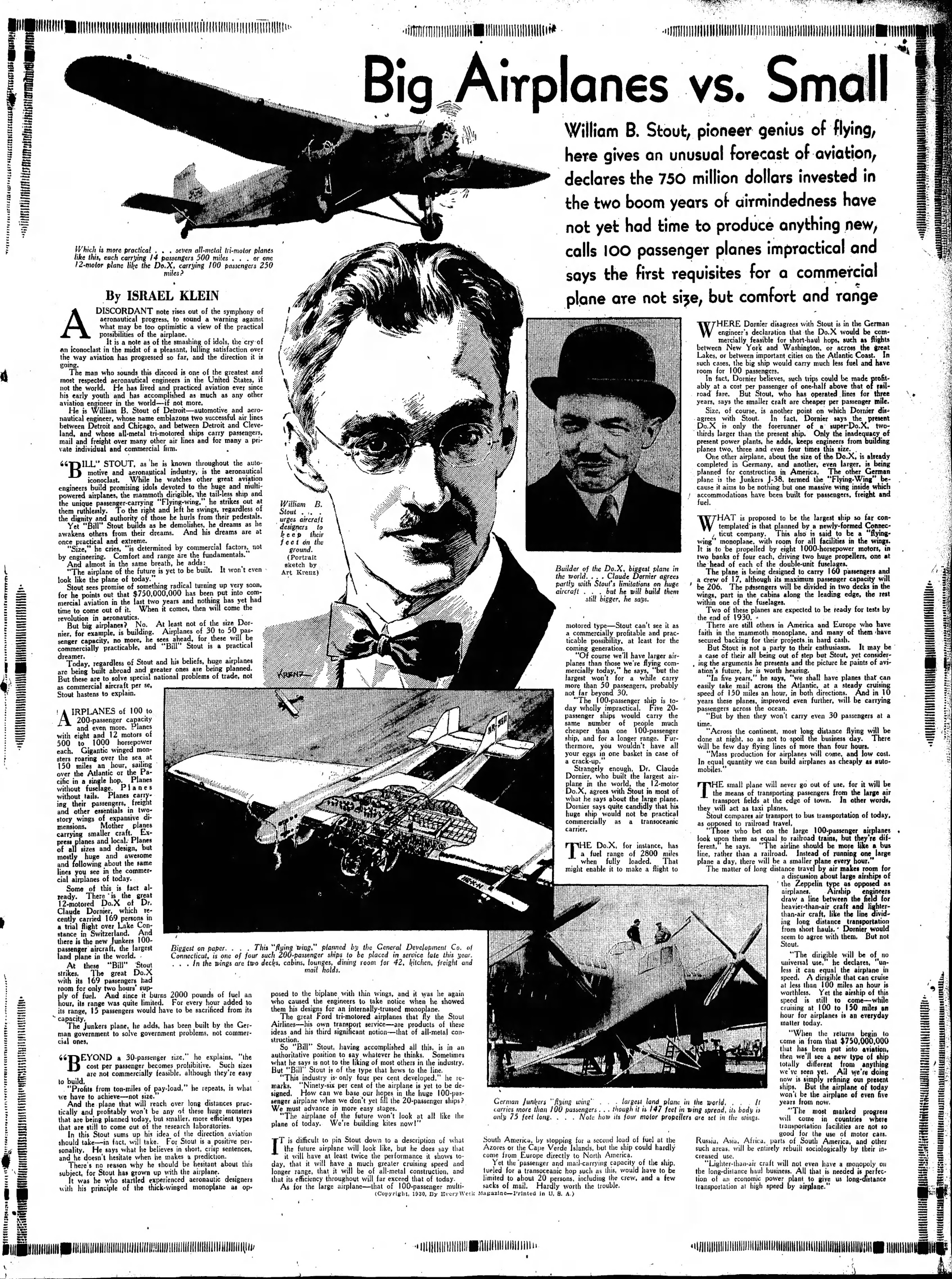 Perhaps the modern equivalent will be the SpaceX Starship and Super Heavy, currently being developed at Starbase near Boca Chica, Texas. According to the Starship User Guide, “the Starship crew configuration can transport up to 100 people from Earth into [low Earth orbit] and on to the Moon and Mars.”

In a September 21 address to the United Nations General Assembly, Secretary General António Guterres cited “billionaires joyriding to space” as one of the world's problems. According to Jeff Foust at Space News:

“At the same time, another disease is spreading in our world today: a malady of mistrust,” he said, after mentioning the pandemic and the climate crisis. That included, he said, when people “see billionaires joyriding to space while millions go hungry on earth.”

He did not elaborate on that claim in his address, saying only that such issues may cause people “to lose faith not only in their governments and institutions but in the values that have animated the work of the United Nations for over 75 years.”

I would point the Secretary General to the giant leaps one hundred years ago in aviation technology, at the time of a global depression, that led to commercial passenger aviation affordable for almost anyone on the planet.

Millions go hungry on Earth not because of NewSpace.

They go hungry because global leaders can't get their priorities straight.

I suspect that those who are hungry don't blame Elon Musk or Jeff Bezos or Richard Branson for their hunger.

I do suspect that, when they see “regular people” going to space, many of them are inspired to believe that better days lie ahead.

Because if that is possible, solving hunger and homelessless and disease can't be that hard.

BREAKING NEWS September 24, 2021 — TMZ reports that 90-year old actor William Shatner is one of the crew members for the scheduled October 15 launch of Blue Origin's New Shepard. The report has not been confirmed by Mr. Shatner or any other source.