Tampa, We've Had a Problem

Sixty years ago today, on September 19, 1961, NASA announced that its human spaceflight program would be based in Houston, Texas.

As with most government programs, politics played a role in the decision.

The popular myth is that Vice President Lyndon B. Johnson somehow steered the decision to his home state. That myth is not supported by the evidence.

But members of Congress, governors, and many others with a vested interest tried to interfere in the selection.

An excellent resource for this topic is John F. Kennedy and the Race to the Moon, by John M. Logsdon, who is generally considered the preeminent American space policy scholar. The book focused on the politics and policy behind Kennedy's decision to propose what came to be known as Project Apollo. Logsdon's work will be cited throughout this article.


Dr. John Logsdon presents a lecture based on his book, “John F. Kennedy and the Race to the Moon.” Video source: KISSCaltech YouTube channel.

On May 25, 1961, President John F. Kennedy proposed to Congress that the United States land a man on the Moon by the end of that decade.

Shepard and the other Project Mercury astronauts were based at Langley Air Force Base in Virginia. Langley's facilities were limited, and NASA management knew that much more extensive facilities would be required for what was then called the Space Task Group.

Word leaked out through Aviation Week magazine that NASA might be looking to move its Space Task Group headquarters. According to the article, the leading candidate cities were Houston, Texas and Tampa, Florida.

Politicians began to do what they do — protect the interests of their constituencies.

The U.S. Air Force, during the Eisenhower administration, in April 1960 announced their intention to close MacDill Air Force Base in Tampa by mid-1962. Planes and pilots already were being transferred elsewhere. Despite the recent overthrow of Cuba's government by forces led by Fidel Castro, one USAF official in June 1960 told the Tampa Tribune that Air Force officials didn't see any immediate “physical” threat from Cuba.

Local leaders were scrambling to find a reuse for the base. For Tampa, the Space Task Group was political manna. With Cape Canaveral about 150 miles to the northeast, MacDill to them seemed a logical solution. Tampa and Florida state leaders began a statewide campaign to bring the STG to MacDill. W. Scott Christopher, executive secretary of the Greater Tampa Chamber of Commerce, told the Tampa Tribune that he'd been tipped by an “important supply source in the missile industry” that STG might move to Tampa. He claimed that NASA had already decided that MacDill was “the only Florida site NASA would consider.”

Tampa had Holland, but Houston had Rep. Albert Thomas (D-TX).

Thomas was chair of the House appropriations subcommittee that controlled NASA's funding. Houston was in his district. During the Eisenhower administration, Thomas had urged NASA to locate a “laboratory” affiliated with Rice University, and threatened to withhold funding until he got his way. The “laboratory” went to Greenbelt, Maryland, home of today's Goddard Space Flight Center, but Thomas's intentions were clear.

According to Logsdon, Kennedy's newly appointed NASA Administrator, James Webb, was well aware of Thomas's interests and so NASA officials visited Houston on May 16, 1961 to meet with representatives of the Chamber of Commerce. Thomas made it clear that his offer, and threat, still stood. Rice University was willing to donate a large plot of land. George Brown, a local construction company owner who had financially supported Johnson's political campaigns, hoped to get the contract to build the new center. But the search didn't begin in earnest until after August 7, 1961, when Congress passed the appropriations bill to fund the new center.

Other regions bid too. The White House and NASA were bombarded by offers, through politicians in both houses of Congress. Republican governor John Volpe of Massachusetts pressured Kennedy to deliver the new center to their home state. Kennedy told Webb that the Administrator should make the final decision “in the light of the national interest,” free of political pressure.

On July 7, 1961, Webb directed the creation of a selection team, and the development of selection criteria. According to a 2017 Johnson Space Center history article:

Essential criteria for the new site included the availability of water transport and a first-class all-weather airport, proximity to a major telecommunications network, a well established pool of industrial and contractor support, a readily available supply of water, a mild climate permitting year-round outdoor work and a culturally attractive community. Houston was initially included by virtue of the San Jacinto Ordnance Depot, since military rather than commercial facilities were judged best for helping handle NASA's large retinue of jets and specialized equipment, and because of its recognized, prominent universities, including Rice, Texas, and Texas A&M.

Logsdon wrote on page 129 that 23 sites were reviewed by the selection team — two in Florida, three in Louisiana, nine in Texas, four in Missouri, and five in California. The requirement for a mild climate eliminated Massachusetts and other candidates.

During the summer of 1961, Soviet premier Nikita Khrushchev tested the inexperienced new American president by escalating events in Berlin. The East German government, backed by the Soviet Union, began building a wall to separate the Soviet zone from the zones controlled by the United States, the United Kingdom, and France. The wall would keep the people of East Germany from defecting to the West. The border was closed on August 13, 1961, and by the end of the month Kennedy had begun activating National Guard units for overseas deployment.

On July 31, 1961, the Air Force announced that MacDill would remain open indefinitely, with its B-47 bomber fleet remaining closer to Europe and Cuba.

The St. Petersburg Times reported the next day that Air Force chief of staff Curtis LeMay believed MacDill could house both the 306th Bomb Wing and the new NASA facilities.

But the reality was, so long as MacDill remained a military base, it would be a prime target for an enemy nuclear attack.

As NASA officials prepared to inspect MacDill, the Tampa Bay Times reported on August 19, 1961 that an “informed source” claimed the “Tampa Bay area is the most likely choice, bar none.” The report noted that the team was also going to visit Green Cove Springs Naval Base near Jacksonville, Florida.

The NASA team arrived Monday night August 21, and toured the base the next day. 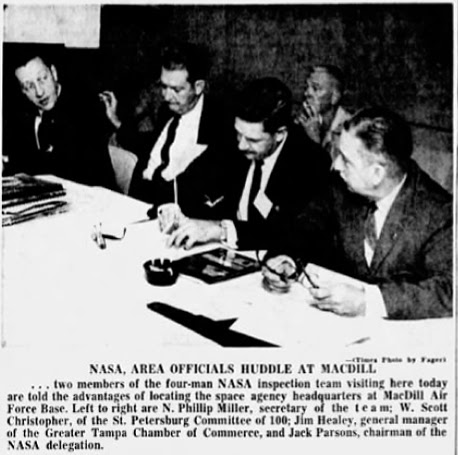 A NASA selection team tours MacDill Air Force Base on August 22, 1961. Click the image to view at a larger size. Image source: The Tampa Times.

The Tampa Times quoted NASA Ames deputy director Jack Parsons as saying that close proximity to cultural and educational facilities ranked high on the list of criteria. The problem was not keeping so much as attracting technical personnel. Representatives of local universities acknowledged that they lacked the graduate programs NASA sought for their engineers and scientists, although such programs were planned for the near future.

NASA announced on September 19, 1961 — sixty years ago today — that the selection team had chosen the Rice University site.

Florida governor Farris Bryant, a Democrat, said that he didn't believe political considerations entered into the decision, but Republican Rep. William Cramer (R-FL) charged that President Kennedy had left the decision to Vice President Johnson, a Texan. Cramer offered no evidence to back up his allegation.

Many other locals tried to blame Johnson. Winston King, a member of the Tampa team, alleged:

My sentiments are perhaps summarized by a statement made by a high NASA official in Washington last week when he said, “Everybody in NASA wants to go to Tampa. Tampa has everything we need. However, it lacks only one thing. It does not have a Lyndon Johnson.”

Once again, no evidence was provided to support the claim, nor was this “high NASA official” ever named.

Did Johnson influence the decision?

Dr. Logsdon's book concludes he did not.

Johnson's primary contribution to Kennedy administration space policy was his April 28, 1961 memo recommending a crewed lunar mission by the end of the 1960s. Kennedy had made Johnson chair of the National Aeronautics and Space Council, but the Council had only one full-time employee and was no more than an advisory body. NASA Administrator James Webb answered to Kennedy, not Johnson. To quote from page 124 of Logsdon's book:

Webb was scrupulous in keeping Johnson informed, but he made it clear that he worked for the president, not the vice president. This also left little room for the vice president and the Space Council staff to play a central role in most of the decisions on how best to move forward in sending Americans to the Moon.

According to Dr. Logsdon, MacDill had been the selection team's first choice, but “at the last minute the Air Force changed its mind about closing MacDill, and the team's second preference, the Houston site associated with Rice University, became the top-ranked choice of the site selection group.”

Logsdon wrote, “it was Albert Thomas, not Johnson, who had the greater influence on the decision to locate the center in Houston.”

So what happened to MacDill?

It's still open to this day.

According to MacDill's web site, “the 1961 Berlin Crisis and 1962 Cuban Missile Crisis led to a reprieve of the planned cutbacks and highlighted MacDill's strategic value.”

If the Soviet bloc had not erected the Berlin Wall in the summer of 1961, if the Cold War had remained cool, the Air Force might have proceeded with closing MacDill, and NASA might have decided to choose Tampa instead of Houston.

Had history followed a different path, the first word spoken on the surface of the Moon might not have been “Houston”:

“Tampa, Tranquility Base Here. The Eagle has Landed.”