Bedeviled by liquid hydrogen leaks in their Space Launch System's core stage, NASA's Artemis 1 launch team have decided to cut their losses and roll the launch vehicle yet again back to the Vehicle Assembly Building.

The devil is in the details.

Liquid hydrogen is a finicky fuel. It's one of many options an engineer has when designing a new rocket. Few rockets, though, use this fuel, which has the chemical formula LH2.

Rockets go up because of the combustion exhaust from the engine nozzles. As Isaac Newton would say, for every action there is an equal and opposite reaction. To create combustion, a chemical reaction is created in the engine’s combustion chamber. For combustion to occur, the reaction must complete what firefighters call the fire triangle. The three components of the fire triangle are a heat source, an oxidizer, and the fuel.

The heat source is typically some sort of ignition, e.g. a spark igniter or an injected chemical called TEA-TEB. The RS-25 Space Shuttle Main Engines (SSMEs), repurposed for SLS, use an augmented spark igniter.

Starting in the 1950s, NASA and its predecessor, the National Advisory Committee for Aeronautics (NACA), began researching a number of fuels that could be mixed with an oxidizer to create combustion for rocket propulsion. LH2 was one of the more exotic fuels researched. LH2 provided about 40% more thrust per pound of fuel burned each second than RP-1, a highly refined kerosene that leaves a hydrocarbon residue after combustion. RP-1 is used to this day by rockets such as the SpaceX Falcon 9 and United Launch Alliance Atlas V, because it can be maintained at room temperature and it's relatively affordable. Hydrogen, the lightest element, is only about half as dense as kerosene.

To achieve the equivalent thrust of RP-1, an LH2 design would require a much larger tank. The tank's components would have to resist LH2's extremely low temperatures. Any leak could lead to catastrophic consequences. A hydrogen fire in daylight is invisible. In the early days of Saturn, support crews would carry brooms in front of them; if the broom caught fire, they knew hydrogen was leaking and burning.

The first stage of the Apollo-era Saturn V generated 7.5 million pounds of thrust from its five F-1 engines. Those engines burned RP-1. Wernher von Braun and his design engineers knew that an LH2 tank would have to be much larger than the S-IC first stage. The Saturn V's upper stages used LH2; they operated in the vacuum of space after the first stage had escaped the atmosphere, achieved near-orbital velocity, and separated from the rest of the stack. The upper stages, therefore, didn't have to be very large.

The Saturn rockets were expendable, meaning the stages either fell back into the Atlantic Ocean, burned up in the atmosphere, or were abandoned to the solar system.

The Space Shuttle, however, was intended to be reusable.

President Richard Nixon's 1969 Space Task Group Report recommended, “A reusable chemically fueled shuttle operating between the surface of the Earth and low-earth orbit in an airline-type mode” as part of a “space transportation system.” (The STS designation for Shuttle missions was an acronym for Space Transportation System.).

If reusability was the goal, LH2 seemed to make more sense as a fuel than RP-1, because RP-1 engines would require cleaning after a flight. An LH2 engine's exhaust is water vapor. 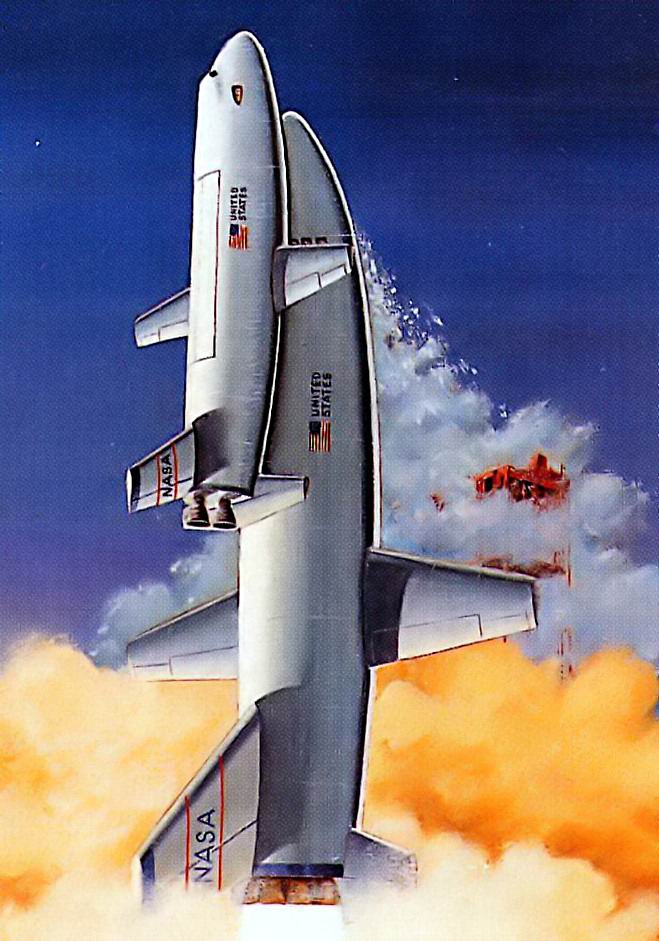 The problem, though, was launch.

Unless a very large fuel tank was used, LH2 due to its low density wouldn't provide enough thrust to launch a big heavy payload. NASA engineers in the early 1970s tried all sorts of concepts, such as a second spaceplane as a booster burning a conventional fuel, while the orbiter would use LH2 once in space. The booster spaceplane would also be crewed, and glide to a landing back at the launch site. This Rube Goldberg Machine concept wasn't very practical or affordable.

The chosen design fudged on the promise of full reusability.

NASA engineers came up with an expendable External Tank (ET) that contained the LOX and LH2. It separated from the orbiter 8½ minutes after launch, fell back into the atmosphere and disintegrated over the Indian Ocean.

To build up enough thrust to leave the pad and send the payload on its way, the engineers attached Solid Rocket Boosters (SRBs) on either side of the ET. The SRBs burned a solid fuel for a little more than two minutes after launch, then separated from the ET and fell back empty into the Atlantic Ocean. Recovery ships retrieved the SRBs and brought them back to Cape Canaveral for refurbishment.

If you watch a Space Shuttle launch, those three engines firing on the bottom of the orbiter might look impressive, but they're not providing most of the thrust. Each of the three engines provides only about 500,000 pounds (2 million N) of thrust. Each of the two SRBs provides about 3 million pounds (13.3 million N) of thrust. The rough calculation is that the SRBs provided about 80% of the thrust at launch. The LH2-fueled SSMEs provided the remaining 20%. Imagine how huge the External Tank would have to be to provide all that thrust at liftoff! The orbiter would have required much larger engines, or many more engines.

The Space Shuttle program was bedeviled by hydrogen leaks. The leaks occurred throughout the history of the program, including STS-119 and STS-127 in 2009, and STS-133 in 2010, near the program's end.

It was around that time that Congress was debating what human spaceflight program should succeed the Space Shuttle.

The Machiavellian machinations of that period have been detailed by NASA's then-Deputy Administrator, Lori Garver. Her book, Escaping Gravity, was published in June. I published a review of the book on June 1.

NASA's Fiscal Year 2011 budget, proposed by the Obama administration, included $3.1 billion over the next five fiscal years to research and develop a new approach to first-stage launch propulsion, and another $7.8 billion over those five years to invent new approaches to spaceflight such as in-orbit fuel depots, and new rendezvous and docking techniques.

Led by two Senators, Bill Nelson (D-FL) and Kay Bailey Hutchison (R-TX), Congress said no to all that.

The Obama administration's proposals didn't protect existing Shuttle contracts, and therefore contractor jobs, in the senators' states. Aided and abetted by other members of the Senate and House, and apparently certain NASA executives as well as the Shuttle contractors, they imposed on the White House a program they named, “Space Launch System.”

A group calling itself the Competitive Space Task Force dubbed the proposal Senate Launch System because it was designed to protect vested interests rather than push new launch technologies. NASA was required to use existing Shuttle technologies and faciities, and was forbidden from innovating unless there was no choice. Rather than fight a losing battle, the White House succumbed to political pressure and agreed to the perpetuation of 1970s technologies. New first-stage booster technology and in-orbit fuel depots were forgotten. SLS became the law of the land in the 2010 NASA authorization act.

Mandating that NASA use existing Shuttle technology meant the continued use of LH2 as a fuel. SLS is basically a Space Shuttle stack, except the side-mounted orbital spaceplane has been replaced by the Orion capsule atop the stack. The SSMEs, now called RS-25s, migrated from the bottom of the orbiter to the bottom of the enlarged external tank, now called a Core Stage. Even though the Core Stage is much bigger than its side boosters, once again the SRBs will provide most of the thrust at liftoff, about 75% by NASA's estimate.

The NASA engineers of the 1970s can be forgiven for selecting LH2. They were trying to develop a reusable launch vehicle; clean-burning hydrogen as a fuel made sense to them. NASA's charter directs the agency to engage in the “improvement of the usefulness, performance, speed, safety, and efficiency of aeronautical and space vehicles.” Pushing the envelope is NASA's raison d'être.

But SLS is not new technology. NASA engineers were forced by Congress to design a launch vehicle with technology nearly a half-century old. Unlike Shuttle, SLS is not partially reusable. It's expendable. As did their predecessors, the SRBs will fall back to the Atlantic Ocean, but this time they won't have parachutes. They'll splat into the Atlantic Ocean, and what remains will sink to the bottom. The Core Stage will fall back into the atmosphere and destroy itself, along with the RS-25 engines that were scavenged from the Shuttle orbiters. Engines that were used over and over on Shuttle will be used once more, but never again.

If SLS is expendable, then there's no reason to use liquid hydrogen as a fuel. But Congress didn't care. They were interested in protecting Shuttle contacts, and the jobs that went with them.

The irony is that Bill Nelson, the co-architect of Space Launch System, is now NASA Administrator. The fox is now running the hen house.

When asked by PBS science correspondent Miles O'Brien about the false assumption twelve years ago that perpetuating old Shuttle technologies would result in faster development of SLS, Nelson replied, “It was a seducing argument, because there were certain technologies we were comfortable with.”

Imagine if, at the dawn of the 20th Century, with the advent of the automobile, Congress had decided to protect the horse-and-buggy industry by mandating that government agencies only purchase horse-drawn carriages. To torture an analogy, horses were the liquid hydrogen engine of their time. They were finicky. And sometimes leaked. (Road apples were the era's hydrogen leak.) But they were reusable.

What should NASA's launch future be? The horse-drawn carriage? Or the Tesla?

UPDATE September 5, 2022 — If LH2 is too impractical for launch reusability, then what fuel is?

The answer seems to be methane, which has the chemical formula CH4.

SpaceX and Blue Origin are now producing liquid methane engines. The SpaceX Raptor will be used on the company’s new Starship and Super Heavy vehicles. The Blue Origin BE-4 engine will be used on their New Glenn, and is also being sold to United Launch Alliance for their Vulcan rocket. All three companies plan to reuse part or all of their boosters.

Like RP-1, methane is a hydrocarbon, but its combustion residue is much cleaner, meaning a vehicle with CH4/LOX engines can be processed and launched again much more quickly. If you’re a commercial company like SpaceX, Blue Origin, or ULA, that efficiency reduces costs and makes your product more competitive.

Elon Musk’s vision for SpaceX is to colonize Mars, making humanity a multiplanetary species. NASA and other spacefaring agencies have been searching for methane on Mars; if it exists, then one day it might be collected to refuel spaceships. Methane naturally exists throughout the solar system, but then hydrogen is the most abundant element in the universe, so your fuel of choice may depend on the physics of your travel.

Had Congress passed the Obama administration’s Fiscal Year 2011 budget request to fund new first-stage launch propulsion technologies, by now NASA probably would have developed functional CH4 engines and American industry would have leapt ahead of the rest of the spacefaring world.

Because Congress opted to go backwards, American entrepreneurs Elon Musk and Jeff Bezos invested their billions in reusability. The United States is now the only nation with reusable boosters, no thanks to Congress.

Posted by SpaceKSC.com at 8:52 PM No comments: